Amok Trey is a traditional dish of Cambodian gastronomy that is favored by most of visitors. The original amok is made from chicken and covered with an aromatic kroeung (mixed of pounded shallots, lemongrass, garlic, kaffir lime according to a general formula), roasted crushed peanuts, coconut milk, and egg. All is rolled by banana leaves and steamed. It then is served in a coconut. The taste is a wonderful blend of coconut flavor, aromatic carry paste and the flesh of chicken. Nowadays, amok trey can be made from beef or freshwater fish fillet (commonly snakehead fish or Mekong catfish). The dish now is well-known as steamed curried fish. It’s also the main dish during the Water Festival which celebrates the change of Tonle Sap River’s flow and thanks Mekong River for providing the country with fertilized land and abundant fish. 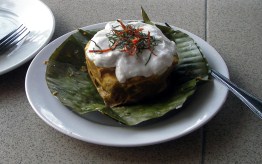 Amok Trey is a traditional dish of Cambodian gastronomy that is favored by most of visitors. The original amok is ...

Ansom chek is a kind of sticky rice cake with bananas in the middle. It has the shape of cylinder ...

Banchao is also present in Vietnam with the name “Banh xeo”. However, banchao in Cambodia, especially in Phnom Penh is ... 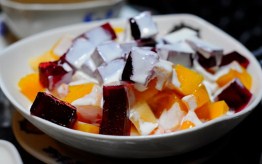 Cha houy teuk is a sweet jelly dessert – one of the most popular street foods in Cambodia. Its sweet ...

In Cambodia, deep-fried insect snack is very popular dish and it is favored as the unique taste and the high-protein ...

Coming to the Cambodian seaside town of Kep, tourists will have chance to enjoy kdam chaa, a dish of fried ...

Kralan is made from rice mixed with beans or peas, grated coconut and coconut milk, palm sugar and sometimes sesame. ...

Kuy teav is a popular dish that is usually served as breakfast in Cambodia. This dish is made of rice ...

In Cambodia, tourists can order lok lak at almost restaurant. The chef will serve you with marinated pork or beef ...

Nom banh chok, so-called as Khmer noodles, is one of the ten most delicious Cambodian dishes according to CNNGO. It’s ... 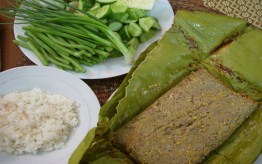 Prahok is a traditional dish that was invented by the Cambodian. It’s made of freshwater fish caught from Tonle Sap ...

Samlor kari is Khmer red curry in Cambodia which is made of chicken, beef or fish. It’s often cooked with ...

In Khmer, "samlor" refers to soup and "machu" mean sour. Samlor machu is a kind of sour soup which is ...

Sankhya lapov is usually used as a dessert at the restaurants in Cambodian. The dish consists of coconut custard steam-baked ... 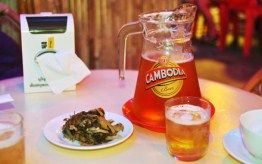 All the famous international brands of soft drinks are available in Cambodia. Locally produced mineral water is available at 500r ...