The Cambodia music and arts scene was dealt a devastating and long felt blow during the awful years of Pol Pot’s rule. Any type of performing art was totally banned and musicians, dancers, artisans and artists who performed the old traditions were executed, diet or lost. Beyond the acts on human life, this period also saw the destruction of artefacts, musical instruments, statues, books and other reminders of the past.

The intention to erase the past was so complete, that only the temples in the Angkor Archaeological Park remained untouched for the reason of being legacies of the past successful Khmer empire. Today, the temples are one of the most popular attractions for the tourists on the Cambodia holidays to see on the Indochina travel experience.

Because of the extent of the destruction in Cambodia, it was feared the Khmer culture had been destroyed forever. But today, there is an air of excitement with a great revival in the traditional Cambodian arts taking place. Plus, more of the escaped Cambodian artists are returning to their roots to help refresh the Cambodian art scene with a blend of new and old styles.

Aspara Dance
Khmer royal dance is the most recognized style of dance in Cambodia which was once only performed in the royal courts by female dancers. It is a decidedly stylised type of dance with quite a few similarities to dance forms in neighbouring Thailand. Similarities relate to decorative headdresses, ornate costumes and stylized hand gestures.

The term Aspara (heavenly goddesses) is given to the Khmer classical dancers which include both men and women in the troupes. The classical dance scene virtually disappeared in the 1970s, with most of the students and teachers disappearing or being killed. But, for those that remained, they created colonies in an attempt to maintain the tradition. In the early 1980’s dance was revived in the Thai refugee camps with the University of Fine Arts re-opening in Cambodia with classes resuming.

The folk dance style of dancing is fast paced with the Khmer dancers wearing tribal, farming or Cham costumes. Many of the dances take place while the music is performed using instruments like traditional stringed, percussion (phiphat), gong circles and xylophones.

The social style of dance at celebrations or weddings often draws their inspiration from Latin steps like the cha-cha and the Laotian traditional dance. For instance, the Ram Vong is a quite slow dance performed by both men and women and includes simple steps and graceful hand gestures.

New music scene
Similar to other art forms, the music scene in Cambodia was heavy impacted for the duration of the Khmer Rouge.

The majority of the famous performers disappeared with the emergence of the Khmer Rouge, but since then a new generation of Khmer people has emerged and created a new and unique sound that include hip hop and rap influenced from other countries, while also creating music by combing psychedelic rock with traditional Cambodian singing, which was popular in the 1960s.

Pinpeat
The classic Khmer music was once a common occurrence for the religious ceremony. One of the oldest musical groups is referred to as the pinpeat which is performed at the religious sites like temples during the festivities. Most of the instruments played are quite similar in style to the old fashioned pieces.

One item is the Chapaye which is a two-stringed wooden instrument and unique to Cambodia while playing the old style of Cambodian blues.

Contemporary art
Cambodia’s contemporary art scene is starting to see rapid growth with artists creating their own unique style which is restricted by past traditions. Although, there are some artists that continue to combine abstract art with classical Khmer paintings. Many of the latest pieces of art are on display in Siem Reap and Phnom Penh, which are worth a visit on the Cambodia tour packages. By promoting the art through the galleries it is possible to create a higher profile and bring fresh momentum to the art scene in the country. Some of the popular styles include a combination of abstract concepts and spiritual inspiration by Chhim Sothy, while a survivor of the Tuol Sleng prison, Vann Nath is creating art that relates to the true horrors of prison. Elsewhere there is Oeur Sokuntevy who creates a series of provocative fine art that includes sculptures in a variety objects such as paint, handmade paper, coffee and rattan.

Khmer heritage arts
Cambodia has a history that is centuries old and therefore there is a great revival of Khmer artisans created the exquisite pieces of wood, stone and silver. One material that has endured a long tradition with the local people is pottery with plenty of ancient kilns located throughout the country. Many of the original techniques are still in use and there are being passed on to the younger generation of Khmer people. The design of the pottery can vary from the very plain and simple to the complex and elaborate.

Artistry in stone
The Khmer artistry can easily be appreciated by viewing the quality of the work at the Angkor temples. But even before this time period, the Cambodian people were creating stunning sculptures that related to Indian carvings, which date to the 7th century AD. Throughout the Angkor temples there are several styles with one of the most influential being the Banteay Srei style which was popular in Southeast Asian art in the late 10th century.

For the tourists on the Cambodia tours there are plenty of reproduction models of Angkorian era statues that are available to buy on the market stalls. 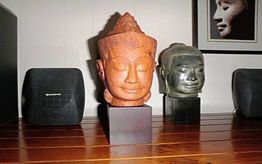 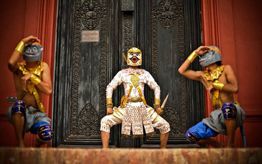 About the Founder Arn Chorn-Pond, founder of Cambodian Living Arts, is a Cambodian-American refugee and was featured in the Emmy-nominated documentary, ... 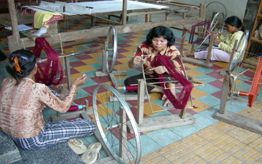 Who we are Small business for development Weaving and wearing silk continues to be an expression of Cambodia's deeply-rooted cultural and social ... 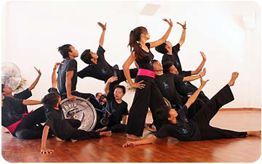 Who we areEvery Person Is Counted The work of Epic Arts aims to change people's attitudes towards disability, encouraging the belief ... 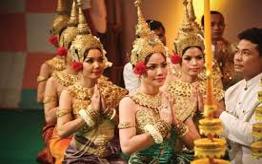 Who we are Everything for peace Originally, Banteay Prieb (“Center of the Dove” in Khmer) is a vocational training center for Cambodians ...

1. Sculpture The stone carving skill of the ancient Khmer was basically inherited from the Indian civilization, however, it was ...