The approach to the Buddhism in Cambodia is quite relaxed, which is similar to most things in the country. The majority of the Cambodian people make a visit to their local pagoda for the traditional Buddhist holidays like Ancestor’s Day (Pchum Ben), but for many this is the full extent of their religious activity.

Religious beliefs
Ever since the 13th century the state religion in Cambodia has been Theravada Buddhism – although this didn’t apply for the time of the Khmer Rouge rule. For the duration of this period, the monks were killed or disrobed and the majority of religious scholars fled into exile or were murdered. Today, the Cambodia population is made up of approx 95% Buddhists. Other religions in the country include Christians at just over 2%, Muslim communities (Malay and Cham) amounting to nearly 3%. Plus, there are a few Western missionaries that are trying to increase the figure of Christians. For the hill tribe people, most of these have their own tribal religions.

Before the country started to follow Buddhism, the official religion of the Khmer Empire was Hinduism. In truth, the iconic Angkor Wat complex was originally a Hindu temple and the sole temple dedicated to the worshipping of Brahma. Even though Hinduism is rarely practiced in today’s Cambodia, it still has to a certain degree an influence on Khmer Buddhist practices, including those related to funerals and weddings.

There aren't many Cambodians that opt to abstain from the Five Precepts of Buddhist belief which relate to drinking, lying, fornication, stealing and killing. Even though the local people might not abide by all five of these commands, they do accept reincarnation and that a future life is related to actions taking in the past.

Cambodian’s are mostly identified as a Buddhist – although the form of Buddhism that is followed might include animism, shamanism and ancestor worship with most of this predating Buddhism.

A common sight seen in many of the temples and private residents on the Cambodia tour packages is a small shrine referred to as a spirit house which is intended to pacify bad spirits and make sure they are kept from the home. Many of the local Khmer people living in the provinces believe in spirits and ghosts. Also, there are still countless folk tales related to ghosts and sorcery that are taken as the truth. A call to a local shaman is common in situations where an illness is reported to originate from an evil spirit.

Unlike the Christian religion, the Buddhists that decide to become a monk know there is no commitment that this calling must be followed for their entire life. After the vows have been taken, a Cambodian man can lead his life as a monk for a relatively short period of time which can last from weeks to months. A benefit of this is the ability to bring closeness to the Buddhist faith and bring merit to their parents. The process of starting to become a monk can start at the age of 13.

A further common practice to become a monk is for the low-income families to get access to education which might not otherwise be available. Plus, the period of monkhood means there is a period of having one less mouth to feed which is appreciated more by the low income families. Also, for this reason, the longer periods of monkhood are noticed with the younger generation living in the countryside.

However, the number of Cambodian citizens that become monks has seen a significant fall. Today, there is approx 5% of men that choose to become monks, which compared to nearly 50% in the years leading up to the Khmer Rouge days. Before this, the total amount of men adopting the monk lifestyle was close to 100% a hundred years ago.

Many of the elderly women (mostly widows) make the decision to live in the temples or pagodas to act as a helper to avoid becoming a burden for their family. They are referred to as mae chi and make the decision to shave both their eyebrows and heads, and offer services like preparing and cleaning the altars to be ready for the ceremonies. Plus, they abide by 10 precepts which are a lot less than the 235 followed by the nuns.

Religious practitioners
The local Theravada Buddhist monks are a common sight for the tourist to see on the Cambodia holiday walking in town in the early mornings wearing their saffron robes. The monks will go to markets or door to door asking for offerings.

Beyond the monks there are several other specialists and practitioners. The achar has a key role with their expert knowledge in the different formulas for the rituals and also leading the public chanting. The krou khmaer (also referred as the krou) is an expert in traditional magic and medicine, and has the responsibility of negotiating with the spirits and makes amulets. There is the krou khmaer who is able to specialize in black magic. Also, there is the roup arâkk or roup that is a type of spirit medium and has the ability to obtain special knowledge.

Rituals and holy places
The Buddhist temples are a major part of the community life of the Cambodian people, as well as the many Buddhist holidays that take place throughout the year. These holidays mostly related to the agricultural cycle and the seasons. Monks are expected to stay within a certain temple for the duration of the rainy season and a ceremony helps with marking the start and end of the retreat.

A period that has two major holidays is when the rainy season ends and before the new harvest is able to take place. These holidays include Kâthin (a time for presenting ceremonial monk’s robes and processions) and Pchum Ben (a ceremony lasting 2 weeks that honours the spirits of the dead).

Other important holidays that might be noticed on the Cambodia tours includes the one held in February related to the Buddha's last sermon and May which is for the Buddha's birth and enlightenment. Also, there is the Buddhist lunar calendar that is occurring in April and relates to both secular and religious aspects. 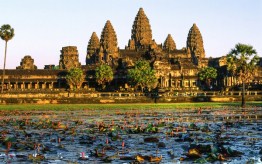 Hinduism was the first religion influencing Cambodia. It flourished alongside Buddhism from the 1st century until the 14th century, during ...

Islam is practiced by about 2% of Cambodian population.  However, there are only about half a dozen Muslims fluent in ...

Buddhism was introduced to Cambodia in around 12th century. It grew and eventually became the popular religion in Angkor Kingdom, ...

You are welcome to Mandalay to enjoy many architectural marvels and artistic wonders of which the largest stone Buddha Image ...