Even though the Vietnam War ended, the problems within South East Asia were not over for a few more years. The regime of Pol Pot and the Kymer Rouge lasted just a few years. It caused untold damage to Vietnam’s neighbour, Cambodia, and even today, it is can be upsetting to see reminders of those brief years. The Khmer Rouge survived in relative isolation for years more but happily it is no more. The regime fell in 1979 and so it is approaching four decades since those terrible times and tourists are very much on Cambodia’s radar. Cambodia tour packages select the best things to do in Cambodia and they far outweigh any small negatives about having a holiday in the Country.

Cambodia is still largely rural and that in itself is an attraction. Travellers will come across small villages, paddy fields and smiling children. Life may be hard but tourists would not know it from the expression on children’s faces.  When planning a Cambodia family tour, it is worth talking to a good Cambodia travel agent who will advise on the main attractions and make all the necessary arrangements. 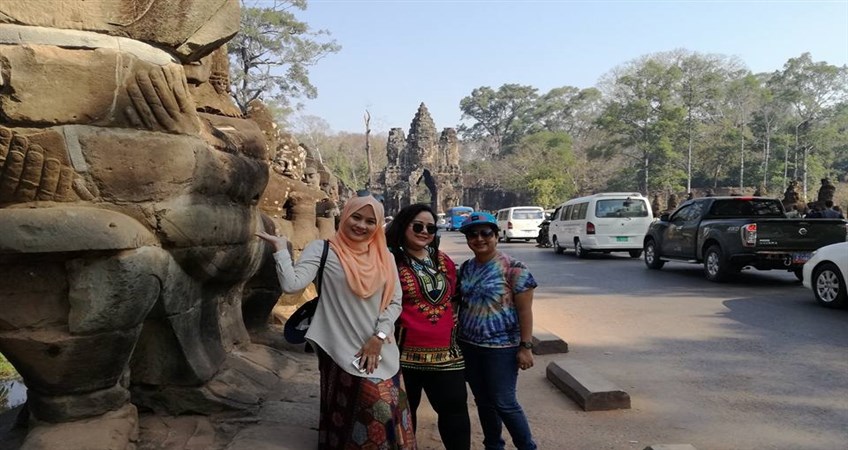 •    The 400-square kilometre complex of Angkor is certainly the highlight of the Country. Angkor Wat is regularly used to illustrate Cambodia and the site receives a huge number of tourists each year. The Khmer Empire ruled here and the buildings date back between the 9th and 15th Century and quite rightly it has been awarded UNESCO World Heritage status.

•    The Bayon is the focal point of Angkor Thom. There is a moat surrounding the city and four stone entry gates. Several statues of gods and giants are impressive features of a visit. Ta Prohm Monastery is to the east and remains in the same condition as when it was found. The jungle surrounds it and many trees grow through the ruins.

•    Siem Reap is the setting off point for Angkor and just to the south, tourists will find Tonle Sap, the largest lake in South East Asia. It is a delight for birdwatchers, whatever the season. It covers 15,000 square kilometres during the monsoon, over five times its size in the dry season when it may only be a metre deep. It can be as much as 8 metres deep in a rainy year. Not surprisingly, the village houses are on stilts.

•    Phnom Penh is the capital and as such has many modern buildings but equally some architecture that is included in every Cambodia travel guide. The Royal Palace dates back to 1866 and the site includes two pagodas. Other notable attractions are the Khmer styled Throne Hall, the Royal Treasury and Napoleon III’s villa.

•    Wat Phnom is a Buddhist Temple of the 14th Century. It stands at 27 metres and at the Cambodia New Year it is the centre-piece of the celebrations. It was on an artificial hill so it is easily seen within the city.Wat Botum is also in Phnom Penh and was built a century later. It is the final resting place of many important Cambodians.

•    ‘’The Killing Fields’’ of Choeng Ek where tens of thousands were murdered by Pol Pot and the Kymer Rouge are just outside Phnom Penh. The Tuol Sleng Museum and the Choeng Ek Memorial are evidence of what happened in those terrible years.

•    The Mekong River is iconic; it rises on the Tibetan Plateau before heading south through China, Myanmar, Laos, Cambodia and Vietnam to the South China Sea. These days, it is possible to cruise all the way from Phnom Peng down into the Delta in Vietnam.

•    Sihanoukville is not created by nature but was built 50 years ago as a deep-water seaport. It is now Cambodia’s top holiday resort by the sea. Bamboo Island is just offshore and is becoming equally popular with travellers.

•    The natural beauty of Cambodia should not be forgotten. The Cardamom Mountains have impressive waterfalls and forests. It is a great area for hikers. The highest mountain is around 1,800 metres and there is an impressive range of mammals even if the chance of a tiger or clouded leopard is remote. There is a much better chance of gaur, wild dog and gibbon while there are also dolphins in the rivers.

•    Mondulkiri to the east near Vietnam is the largest province of the country. It may be sparsely populated and very poor but it has retained its natural beauty.   There are most several waterfalls andwoodland, flora and fauna to enjoy.

Cambodia is an inexpensive country which is happy to greet tourists. It may not have the best transport infrastructure but in many ways, that is part of its charm. The cuisine is great yet there are perhaps some ingredients that foreigners may wish to avoid; spiders and crickets as an example.

The best and worst things about visiting Cambodia reveal many positive things and very few negatives. If you are on an organised tour package, you are likely to have a guide with you most of the time and hence be safeguarded against any problems.

Inevitably, in a poor country, there are occasions when a tourist will be seen as a way to make money. That might be overcharging, and even scams. In that way, Cambodia is no different from any other country. There is petty crime but normal safeguards should mean you can avoid such things.

When it comes to the best time to visit Cambodia, it is important to remember the monsoon. The weather is hot all year round but as June approaches moist air is drawn in and the monsoon starts, lasting until towards the end of October. It is then largely dry though temperatures fall a little. However, it is the main tourist time because it is comfortable by day.  Temperatures rise from March until the return of the rains. There are advantages of visiting during those rains; everything is less crowded and cheaper as well; photographs reveal lovely greenery and a fresh look.