The main holiday period in Western Europe and North America is the Northern Hemisphere summer months from May around to September. That is the low season in South East when you can take a Vietnam budget tour and enjoy the Country’s many attractions at a quieter time of the year. One of the advantages of travelling this time of the year is certainly that you can arrange a cheap Vietnam tourwithout a problem. Vietnam is fairly inexpensive any time of the year it must be said, and the evidence is clear with tourist numbers increasing year on year.

While some tourists travel as independent backpackers, it is worth using an experienced Vietnam travel agent to get the best from your time in the Country; custom Vietnam tour packages can be arranged to take you to the places you want to see.

Vietnam visas are easy to arrange and in low season you will certainly get some rain but do not think you are going to get hour after hour of torrential rain; sometimes it is just an afternoon shower which can actually be refreshing on a hot day and the temperatures may drop a few degrees as well without it remotely getting cool, never mind cold. Rain is refreshing to you but also the vegetation. Vietnam’s flora is more impressive while there is rain in the air as opposed to week after week of dry weather.

There are some things that are actually better in low season. Take for example the SaPa Terraces north of Hanoi towards the Chinese border. After harvest time, as the high season begins, they are left until the next planting season. In May onwards, those Terraces shimmer with the sun shining on the water and then go through different shades of green until they are ready for harvest when the Terraces look golden; that is in September.

As already mentioned, prices are likely to be cheaper and accommodation availability improves. Some places in high season are fully booked yet in low season, you are likely to have more success if you make a late change to your itinerary for any reason, need to find somewhere to stay and want some choice. Airfares also vary through the year and if demand falls, then prices can too; that is likely in low season obviously.

Popular tourist attractions will be less crowded in low season. Halong Bay in the peak weeks is full of boats, people enjoying cruising through the islands of this UNESCO World Heritage site. You will still be able to marvel at the Bay whatever traffic there is around, but the quieter the better certainly applies. There is no reason from a climatic point of view to go to the Bay in high season rather than low.

The resorts of Central and Southern Vietnam are certainly open for business during the low season. There are a number of resorts heading south from Danang that welcome tourists twelve months a year with costs reducing in low season. Mui Ne Beach is a good example while Phu Quoc is an island in the South China Sea off the Cambodian Coast. Fewer people on the beaches because it is low season is certainly good news. Vietnam has an extensive coastline, in excess of 3,000 kilometres, great beaches, interesting islands and lovely waters. There may be days when you may not fancy heading to a beach and swimming but there is always something else to do in most of the coastal resorts.

Thewell-developed transport infrastructure of Vietnam minimises any disruption when heavy rains do come. That contrasts with some other Asian countries where transport links are not so good. You can fly between the major cities if you wish and even if it is raining the many interesting museums and temples provide interest as well as shelter if you need it. The local traders are also well aware that there are fewer potential customers in the low season and their prices reflect that accordingly. 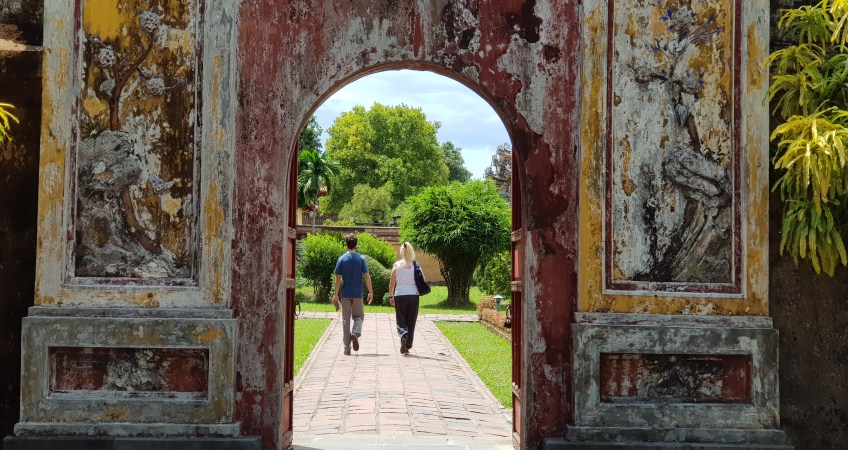 Other landmarks in general look just as good in low season without so many people gathering.

At weekends, there will be an increase in numbers simply because locals will be out with their families to enjoy such things as Hoan Kiem Lake, the Imperial Citadel and Ho Chi Minh’s Mausoleum, all in Hanoi. In Hue, cruises take you along the Perfume River to get a good view of the Imperial Old Town on the north bank and the Tombs on the south bank. In Hoi An, you can explore the narrow streets, enjoy the Japanese Covered Bridge which houses its own temple and see the colourful lanterns once the sun sets. There will be plenty of sun even though low season is described as the rainy or monsoon season. Down in the south in Ho Chi Minh City, the old French architecture is certainly worth seeing; it is largely in one small part of the City and contrasts sharply with the 21st Century skyscrapers.

If you have any doubts about travelling to Vietnam in low season, here is what you should do. If you contact a good Vietnam travel agency, you will not be committed in any way if you ask questions and seek advice about an itinerary to get the best out of Vietnam in low season. An agency will ask you about the time you have available and make suggestions about the best way to fill those days.  You will likely get some rain, but it is extremely unlikely that it will spoil your holiday.

Vietnam’s tourism business has grown enormously in recent years because of its natural environment, history, culture, cuisine and the people themselves. If you regularly take your holidays in what is the Northern Hemisphere’s summer, then Vietnam is very much an option. You are likely to have more time available in those months and Vietnam has enough to interest you for your annual holiday, and who knows your annual holiday again in the future?