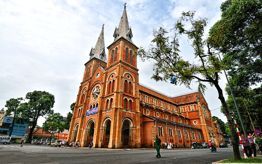 Ask any local people about the location of the city’s center or its symbol, the answer would definitely be Ben Thanh Market or Saigon Notre Dame Cathedral (officially Basilica of Our Lady of The Immaculate Conception). While the market stands at a modern and crowded corner of the business district, the ancient cathedral is located in a very peaceful picturesque corner in the downtown of Ho Chi Minh City.

Constructed between 1863 and 1880 by the French colonists, following their conquest of the city, the building reaches a height of up to 60m. Bishop Lefevre put the first stone for construction of the church on 28 March 1863. Initially, it was called Saigon Church. The name Notre-Dame Cathedral was given after Bishop Pham Van Thien held a ceremony to install the statue of Peaceful Notre Dame, made with granite from Rome, in 1959. In 1962, Vatican anointed it as Saigon Chief Cathedral conferred it basilique. Since this time, this cathedral is called Saigon Notre-Dame Cathedral Basilica.

Its design, apart from the intention to create a religious look, aims at showing the influence of French civilization and Christianity over Saigon. At the time it was built, the Basilica was the most beautiful cathedral of this kind amongst all French colonies. All the materials were directly imported from France like red bricks of the outside walls, which retain their bright and lively red color until today. To people’s amazement, the two bell towers, each with the height of 60.5m and 6 bronze bells have just been added in 1895.

The reminiscent of an ancient charming Saigon

In front of the cathedral stands a Virgin Mary statue, which is said to have shed tears in 2005, causing thousands of people to stop around the Basilica. Amidst an active and continuously moving Saigon today, the French-influenced design of Saigon Notre Dame Cathedral still acts as a stop for people who seek for old beauties and calmness. Not only followers keep praying under candle lights in front of Virgin Mary statue everyday but tourists and local people also come there to discover the true soul of the city. The cathedral looks most beautiful in daylight, together with the smiles of couples coming to take photograph and record movies, especially for wedding.

Of course, there should be no worry about how to get there as the route is easy and almost everyone can give tourists guidance. Entrance is free and visitors can attend masses easily at weekend. 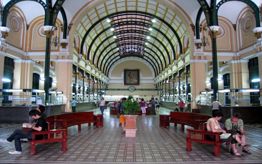 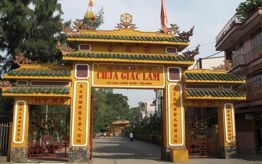 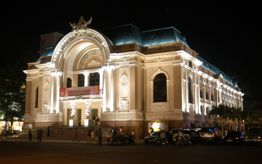 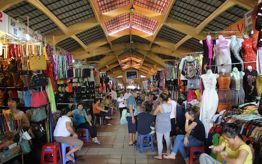 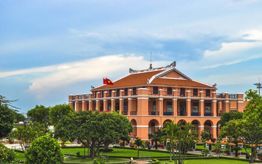 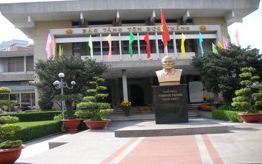 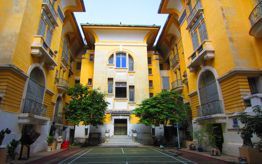