If you travel to Thailand, don't miss to explore the Historic city of Ayutthaya - one of Thailand World Heritages.

Founded c. 1350, Ayutthaya became the second Siamese capital after Sukhothai. It was destroyed by the Burmese in the 18th century. Its remains, characterized by the prang (reliquary towers) and gigantic monasteries, give an idea of its past splendour.

The Historic City of Ayutthaya, founded in 1350, was the second capital of the Siamese Kingdom. It flourished from the 14th to the 18th centuries, during which time it grew to be one of the world’s largest and most cosmopolitan urban areas and a center of global diplomacy and commerce. Ayutthaya was strategically located on an island surrounded by three rivers connecting the city to the sea. This site was chosen because it was located above the tidal bore of the Gulf of Siam as it existed at that time, thus preventing attack of the city by the sea-going warships of other nations. The location also helped to protect the city from seasonal flooding.

The city was attacked and razed by the Burmese army in 1767 who burned the city to the ground and forced the inhabitants to abandon the city. The city was never rebuilt in the same location and remains known today as an extensive archaeological site.

Once an important center of global diplomacy and commerce, Ayutthaya is now an archaeological ruin, characterized by the remains of tall prang (reliquary towers) and Buddhist monasteries of monumental proportions, which give an idea of the city’s past size and the splendor of its architecture.

Well-known from contemporary sources and maps, Ayutthaya was laid out according to a systematic and rigid city planning grid, consisting of roads, canals, and moats around all the principal structures. The scheme took maximum advantage of the city’s position in the midst of three rivers and had a hydraulic system for water management which was technologically extremely advanced and unique in the world.

The city was ideally situated at the head of the Gulf of Siam, equi-distant between India and China and well upstream to be protected from Arab and European powers who were expanding their influence in the region even as Ayutthaya was itself consolidating and extending its own power to fill the vacuum left by the fall of Angkor. As a result, Ayutthaya became a center of economics and trade at the regional and global levels, and an important connecting point between the East and the West. The Royal Court of Ayutthaya exchanged ambassadors far and wide, including with the French Court at Versailles and the Mughal Court in Delhi, as well as with imperial courts of Japan and China. Foreigners served in the employ of the government and also lived in the city as private individuals. Downstream from the Ayutthaya Royal Palace there were enclaves of foreign traders and missionaries, each building in their own architectural style. Foreign influences were many in the city and can still be seen in the surviving art and in the architectural ruins.

The Ayutthaya school of art showcases the ingenuity and the creativity of the Ayutthaya civilization as well as its ability to assimilate a multitude of foreign influences. The large palaces and the Buddhist monasteries constructed in the capital, for example at Wat Mahathat and Wat Phra Si Sanphet, are testimony to both the economic vitality and technological prowess of their builders, as well as to the appeal of the intellectual tradition they embodied. All buildings were elegantly decorated with the highest quality of crafts and mural paintings, which consisted of an eclectic mixture of traditional styles surviving from Sukhothai, inherited from Angkor, and borrowed from the 17th and 18th century art styles of Japan, China, India, Persia and Europe, creating a rich and unique expression of a cosmopolitan culture and laying the foundation for the fusion of styles of art and architecture popular throughout the succeeding Rattanakosin Era and onwards.

Indeed, when the capital of the restored kingdom was moved downstream and a new city built at Bangkok, there was a conscious attempt to recreate the urban template and architectural form of Ayutthaya. Many of the surviving architects and builders from Ayutthaya were brought in to work on building the new capital. This pattern of urban replication is in keeping with the urban planning concept in which cities of the world consciously try to emulate the perfection of the mythical city of Ayodhaya. In Thai, the official name for the new capital at Bangkok retains “Ayutthaya” as part of its formal title.

Criterion (iii): The Historic City of Ayutthaya bears excellent witness to the period of development of a true national Thai art.

The integrity of the property as the ruins of the former Siamese capital is found in the preservation of the ruined or reconstructed state of those physical elements which characterized this once great city. These consist of first and foremost the urban morphology, the originality of which is known from contemporary maps of the time prepared by several of the foreign emissaries assigned to the Royal Court. These maps reveal an elaborate, but systematic pattern of streets and canals throughout the entire island and dividing the urban space into strictly controlled zones each with its own characteristic use and therefore architecture. The urban planning template of the entire island remains visible and intact, along with the ruins of all the major temples and monuments identified in the ancient maps. Wherever the ruins of these structures had been built over after the city was abandoned, they are now uncovered.

In addition, the ruins of all the most important buildings have been consolidated, repaired and sometimes reconstructed.

The designated area of the World Heritage property, which is confined to the former Royal Palace precinct and its immediate surrounding and covers the most important sites and monuments and ensures the preservation of the property’s Outstanding Universal Value. Initially it was intended to manage the remaining historic monuments through complementary planning and protection controls, however, present economic and social factors warrant an extension of the historical park to cover the whole of Ayutthaya Island for the protection of all associated ancient monuments and sites as well as to strengthen the integrity of the World Heritage property. Extending the boundaries of the World Heritage property to include the whole of Ayutthaya Island will bring the boundaries of the property into exact conformity with those of the historic city.

The Historic City of Ayutthaya is well-known from historical records. As one of the world’s largest cities of its time and a major political, economic and religious center, many visitors recorded facts about the city and their experiences there. The Siamese Royal Court also kept meticulous records; many were destroyed in the sack of the city, but some have remained and are an important source of authenticity. The same can be said for the testimony of works of art, wall painting, sculpture, and palm leaf manuscripts which survive from the period. Of particular note are the surviving mural paintings in the crypt of Wat Ratchaburana. Careful attention to the accurate interpretation of the ruins to the public for educational purposes also contributes to the property’s authenticity.

In addition to formal legal protection, there is a Master Plan for the property which has Cabinet approval. Committees for the protection and development of the Historic City of Ayutthaya at the national and local and levels have been established and there are a number of special-interest heritage conservation groups among the non-governmental community.

The budget for the conservation and development of the Historic City of Ayutthaya is allocated by the Government and the private sector.

An extension of the World Heritage property is under preparation which will cover the complete footprint of the city of Ayutthaya as it existed in the 18th century, when it was one of the world’s largest urban areas. This will bring other important ancient monuments, some of which are outside of the presently-inscribed area under the same protection and conservation management afforded to the current World heritage property. In addition, new regulations for the control of construction within the property’s extended boundaries are being formulated to ensure that the values and views of the historic city are protected. With these changes, all new developments in the modern city of Ayutthaya will be directed to areas outside of the historic city’s footprint and the inscribed World Heritage property.

Ban Chiang is considered the most important prehistoric settlement so far discovered in South-East Asia. It marks an important stage ... 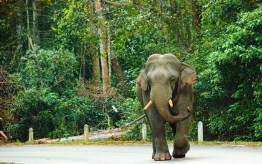 The Dong Phayayen-Khao Yai Forest Complex spans 230 km between Ta Phraya National Park on the Cambodian border in the ... 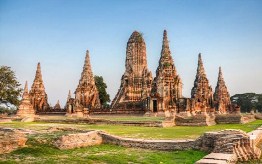 If you travel to Thailand, don't miss to explore the Historic city of Ayutthaya - one of Thailand World Heritages. Founded ...

Visiting historic Town of Sukhothai and Associated Historic Towns is one of amazing experiences in your Thailand travel tour. Sukhothai ...

Thungyai-Huai Kha Khaeng Wildlife Sanctuaries was list as Thailand World Heritage in 1991. Stretching over more than 600,000 ha along ...