Without doubt, Thailand is currently the most popular of the South-East Asia countries for tourists. Its tourism figures have been impressive for some time and undoubtedly, they have been boosted by the many films, fiction as well as documentary that have used Thailand as the centrepiece. Some have covered Bangkok and its many attractions, others the stunning coastline, beaches, islands and crystal clear seas. Thailand tour packages offer a balance between history, religion and culture and the chance to enjoy the wonderful natural environment. The people are naturally hospitable but it is important to show respect to their custom and religion. Your respect will be repaid several times over. The infrastructure of the country is well-developed so Thailand travel is extremely easy, by road, rail and air.

Geography
Thailand divides itself up in many provinces, districts and villages but the best way to remember it is by thinking about the geographical divisions:

•    The Northern mountains and forests.
•    The Central Plains, the fertile rice growing area.
•    The North-East Plateau where agriculture is important, albeit it is semi-arid.
•    The Coastline and the tropical islands.
Thailand has several borders:
•    Myanmar to the north and west.
•    Laos to the north and northeast.
•    Cambodia to the southeast.
•    Malaysia to the south.

Bangkok is the capital and by far the biggest city. It is a magical place, extremely busy, sometimes frustrating but certainly an ideal place to begin a Thailand private tour. King Bhumibol Adulyadej, the 9th King of the Chakri Dynasty which began in 1782, died recently having ruled for 70 years.

Climate
Thailand is tropical and humid for most of the year. The North could probably be described as having three seasons, the south two.

In the north, it is largely dry from November until May though the first half of that period is cooled by the northeast monsoon winds though it does not receive its rain. That comes from the southwest monsoon that dominates the region from June onwards.

The South is either wet or dry season; there is a difference depending on the coast, east or west. On the west, it rains between April and October, the east, September to December. It is the south that receives the most rain.

People
Thailand, formerly Siam, has never been colonised. Instead, it has absorbed people of several nationalities and skills. There are artists of all kinds and the culture of Thailand has absorbed many of the things they have brought.

Thai, Mon, Khmer, Laotian, Chinese, Malay, Persian and Indians coming to the country have meant that there is no typical Thai physique. Some are fair, others dark, some tall, others short. English is widely understood in places such as Bangkok but many people ethnically originating in other countries have often forgotten their native language.

Cuisine
Thai cuisine has absorbed many of influences from neighbouring countries. China has no direct border but there is little doubt that Chinese cuisine has helped in the development of Thai cooking. Thai cuisine is now very popular far beyond the national borders and it is known for its taste and clarity. Rice and noodles are part of most meals, soups common and quite a range of fresh fruit and vegetables used in combination with pork, chicken, beef and seafood to make great meals. Thai curry is very popular in many countries with chili, lemon grass, garlic, fish sauce, shrimp paste and soy sauce in regular use. Street food is a delight and even on organised Thailand tour packages there will certainly be time to enjoy it.  Tea and coffee, fruit juice and coconut milk is available for those not wanting alcohol; otherwise beer, rice wine and spirits are available in most places.

Theravada Buddhism is the religion of over 95% of Thais. However, there are a small number of Muslims (4%) mainly ...

Thai, also known precisely as Siamese or Central Thai,[ is the national and official language of Thailand and the native ... 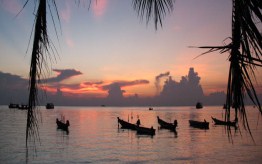 The Thailand climate is controlled by tropical monsoons and the weather in Thailand is generally hot and humid across most ... 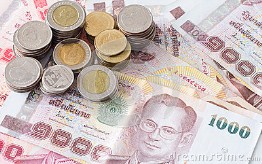 The Thai Onshore Baht (THB) is the everyday currency used to purchase goods and services in Thailand. The Thai government ...