Ethnic Khmeris accounted for 90% of the population in Cambodia. Scientists said that they were present from 3000 years ago. Therefore,the history of the Khmer people associated withthe history of Cambodia. Most of Khmer people are Buddhist Khmer - a Buddhist-style which mixed by multi-component: Hinduism, animism theory, the custom of ancestor worship. The main festival of the Khmer - Cambodian is:
Don ta (grandparents signaling ceremony)
Cow riders
Chol-Chnam-thmay (New Year Festival)

Ethnic Khmeris accounted for 90% of the population in Cambodia. Scientists said that they were present from 3000 years ago. ...

Vietnamese people are the largest non-Khmer ethnic group in Cambodia. Vietnamese in Cambodia are mainly descended from settlers who immigrated ...

Chinese people are accounted for about 9% of the Cambodia population. They speak many languages such as Teochiu, Cantonese, Hokkien ... 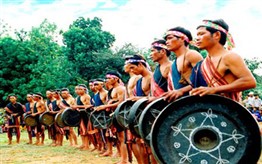 The Khmer Loeu is the Mon–Khmer highland tribes in Cambodia. Their society is apparently patriarchal, male-supremacy mentality. Their organization is ...