Warning: fsockopen(): Failed to enable crypto in /home/customer/www/indochinavalue.com/public_html/plugins/system/jch_optimize/jchoptimize/helper.php on line 409

The Royal Ploughing Ceremony, or 'Bon Chroat Preah Nongkoal' in the Khmer language, is solemnly celebrated at the beginning of the sowing and planting season. Every year in May, this cultural ceremony takes place at the park in front of the National Museum (next to the Royal Palace). Cambodia has deep connection with earth and farming. There is a deep astrological belief that royal oxen known in Khmer as Usapheak Reach, have an instrumental role in determining the fate of the agricultural harvest each year.

Traditionally, the King Meak, representing the king of Cambodia, ploughs the field whilst the Queen, the Preah Mehuo, sows seeds from behind. The field is ceremoniously ploughed three times around. The royal servants then drive the royal oxen to seven golden trays containing rice, corn, sesame seeds, beans, grass, water, and wine to feed. The royal soothsayers interpret what the oxen have eaten and predict a series of events including epidemics, floods, good harvests, and excessive rainfall. At this festival, both men and women wear brightly colored Khmer traditional costume.

Date: 02 Dec Venue: In front of the Central Sanctuary of Angkor Wat This internationally recognized half marathon raises relief for the ... 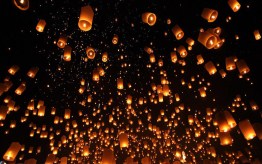 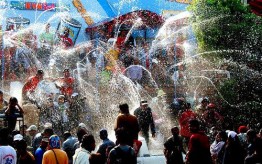 The Water Festival, a spectacle to behold, is probably the most exorbitant festival held each year in November. It is ... 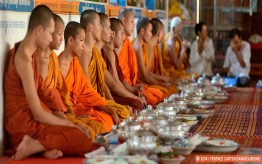 Running for 15 days, usually from the end of September into October, this festival is dedicated to blessing the spirits ... 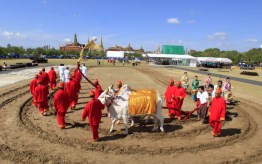 The Royal Ploughing Ceremony, or 'Bon Chroat Preah Nongkoal' in the Khmer language, is solemnly celebrated at the beginning of ... 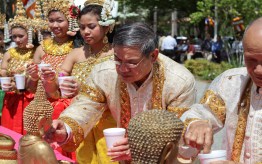 Cambodian New Year is most important holiday. The cities empty as Cambodians rush to spend the holiday with family. The ...