However, the term "Hue Court Music" also indicates to some concrete aspects as such as its historical period (the Nguyen Dynasty - the last Vietnamese feudal dynasty), the site of its being and preservation (Hue, the capital of Vietnam under Nguyen Dynasty) and, as a matter of fact, its evolution in the back - ground general features of the entire Vietnamese Court Music as well as its specific features demonstrated through its achievements and contributions as presented below.

Some Historical Sketches
Hue Court Music was officially formed along with the rise of Nguyen Dynasty in the early 19th century, although its initial grounds were laid in the 17th century when the Nguyen Lords began to rule over Dang Trong (the South). Even in the early stage these initial grounds involved the genres elements and quintessence of Dang Ngoai (the North) music brought about by Dao Duy Tu (11 who followed and served Nguyen Lord. Hue Court Music reached the peak in the first half of the 19th century until the reign of King Tu Due (1848-1883) and began to decline since the French invasive war in Vietnam. After the 1945 August revolution, along with the fall of Vietnam monarchism, Hue Court Music was collapsed and disbanded. In about 1947, 1948, Madame Tu Cung (Mother of King Bao Dai) gathered once again some court music artists, helping to maintain some genres of Hue Court Music and dance. Under Ngo Dinh Diem time, the Sai Gon authority had devoted financial assistance to the two artistic bands "So Vu" and "Co nhac Dai Not", using them in the official receptions of the heads of State and diplomatic missions. These artistic bands then were sent to World Arts Festival as representation of Vietnamese traditional music. Later, the "Ba Vu" band faced large economic difficulties so court music was threatened to be lost. In the 1980s, it began to attract attention of the Ministry of Culture and local authorities. In the 1990s, Hue Court Music enjoyed renaissance. Some genres of court music and dance were renewed by the formation of the “Group of Hue Traditional Arts" and "Hue Royal Tradition Theatre". Thereafter Hue Court Music has been introduced much abroad. Still, Hue Court Music, as it is now, is just a remaining part of the legacy of the former Hue Court Music. It cannot be avoided being distorted in some aspects and details.

Genres
In its ordinary meaning, Court Music is understood as music genres, including music for dance and opera, used in worshiping ceremonies, national court - organized festivities, and occasions of entertainment for kings and Royal families. But the term Nha Nhac (imported from China) was used by Vietnamese feudal dynasties from the Ho Dynasty with different meanings, for example some-times indicating general court music, sometimes court ritual music in particular, sometimes indicating music department, even a concrete orchestra. The modern term "Nha Nhac" (Elegant Music) refers or to the general court music, or to the court ritual music but especially to the second one.

The repertoire for court music genres mentioned above consisted of a variety musical pieces. Yet, in the declining stages, many of them were lost; only the words have been remained. The pieces still preserved are Muoiban ngu(1) (Pham tuyet, Nguyen tieu, Ho quang, Lien hoa, Binh ban, Tay mai, Kim tien, Xuan phong, Long ho, Tau ma), Long dang, Long ngam, Phu luc, Tieu khuc, Tam luan cuu chuyen(2), Dang dart cung, Dang dan don, Dang dan kep, Thai binh Co nhac, Bong, Ma vu, Man and some other pieces of chamber music such as Nam Binh and Nam Ai, etc. Nguyen Dynasty court orchestras were divers in type and number of instruments, depending on the kind of royal rituals and entertainment. There were many kinds of orchestra for example (Nha nhac, Huyen nhac, Ti true te nhac, Tieu nhac, Dai nhac, Coxuy dai nhac, Nhac thieu, Bat am, Ty chung, Ty khanh, Tyco), etc.
What, at present, is left from Hue Court Music is Dai nhac and Tieu nhac (including orchestras and pieces mainly preserved at folk festivities), court dances with an accompanying music part, chamber music (that has been popularized and has new elements, melodies from Hue folk music) and Tuong or hat boi however the specific style of former royal tuong was almost lost). Apart from the genres and pieces of music mentioned above, others will gradually be restored.

- Maintaining some court orchestras of the previous dynasties (the most distinctive of which are Tran Dynasty's Tieu nhac and Dai nhac) and creating rich variations based on Le Dynasty's orchestras;
- The continuing use of many common musical instruments of Thang Long Royal Music (such as, nguyet, tranh, ty ba, nhi, ho, dan sat, ong senh, phach ban used since Ly Dynasty and bien chung, bien khanh, huan, tri, chum, etc, related to the Bat am orchestras in Chinese type from the Post Le Dynasty);
- Maintaining and diversifying some previous court dances (such as Luc cung, Tam tính chuc tho, Tu linh, especially exploiting the lanterns dances folk and court rituals of the Viet in the North, as well as "civil" and "military" dances in Tran and Ho dynasties) at the same time creating many new dances;
- Creating a new type of chamber music (don Cd hue) and enhancing Vietnamese instrumental music to a new height both in performance techniques and forms of ensemble;
- Succeeding the Dang ngoai "Tuong" and bringing it to flourish simultaneously forming a new specific kind of Tuong: the "Tuong Kinh" (Tuong of the capital city) in the style of "Tuong van";
- Succeeding the system of tone regulations of the Hong Due time under Le Dy-nasty in the second half of the 15th century (expressed in the classification of the two music repertoires - the Khach or Bac (Northern) and the Nam (Southern) and developing music language and theory (the most attractive is "hoi ai" (sadness)121 in the Southern repertoire of Hue);
- Continuing the traditions of learning, adopting and Vietnamizing foreign music elements that were shaped in Vietnamese music in general and in Thang Long Court Music in particular (the conception of Yin-Yang, Five Elements, Eight- Sign Figure "five modes and seven tones", music characters and certain musical instrument, etc).

Special Traits
- In Hue Court Music there is the process of integrating, adopting and modifying Chinese, Champa cultures and Buddhist, Confucian impacts. Apart from using some Chinese court music models, this special trait is hidden even in some Vietnamese tunes and motives, and In the use of some modes and musical instruments, etc.
- Being closely connected with "Tuong" (hat boi) art: Tuong is an almost permanent art kind in court cultural activities and a necessary item in the ceremonies of the enthroning of Nguyen Dynasty. Tuong and court dances are closely associated. The principal gestures of Tuong dances, in which students of Tuong should be trained, are the very gestures of "flowers" dance. Many melodies in court dances are Tuong melodies.
- Richness and diversity: Hue Court Music synthesizes itself the abundance and diversity in many aspects. In the art-type aspect, it contains all elements of music, dance, drama, prose, poetry, fine arts (decorative art, carving and inlaying of musical instruments as well as the dresses and implements of artists, etc). In the genre aspect, it is composed of ritual music, chamber music, stage music, instrumental music, vocal music, music for dance and acting. Hue Court Music is diversified in types of instrument and timbre, in repertoires, in kinds of orchestra organization and ensemble forms (duo, trio, quintet, sextet, etc.). Its performance environment could be indoor or outdoor, at shrines or worshipping rostrums, on stages or on boats, etc. It is rich In melody too, (the Bac, Xuan, Ai, Dung, Thien... nuances with different characteristics and sonorities). So Hue Court Music could satisfy both the spectators' audition and vision by its abundance "dishes of different tastes".
- Large scale and highly professional: As the official music of the state, Hue Court Music consists of many large scale orchestras, many music and dance items were performed by a big staff of instrumentalists, singers and dancers. For ex-ample, the "Coxuy Dainhac" orchestra is composed of over 40 instrumentalists, "Bat dat" or "Bai bong" dances are per-formed by 64 dancers, not including instrumentalists.
The former royal instrumentalists were the talents selected from the whole country. They were nursed and trained for many years, even from childhood to be highly professional musical executants.
- High degree of improvisation and variation of the melodious scheme (mainly in chamber music and Tuong). For the same melody, musical instruments can perform differently to show their distinctive ad-vantages; the instrumentalists can also play the same melody in various ways ac-cording to mood, inspiration and performance environment, etc. In music performance, this improvisation and variation is not free because they are regulated by rigid rules. Moreover, improvisation is a criterion to value the artist's talent. Correct and good improvisation can only be obtained thanks to inborn talent, long - run learning and training.
Possibly, due to this trait, a chamber orchestra is composed of the single instruments, which helps to create an intimate, heart-to-heart atmosphere.

- Scholarship: This trait is expressed in many aspects as follows:
+ Being written music thanks to a system of musical characters and signs to record melodies.
+ Music is built in accordance with the ancient cosmology. In order to exist, to harmonize, and develop the cosmos as well as all living substances and aspects of life (including music) are subject to and controlled by the rules of Yin and Yang.
+ There was a system of music theory composed of rules and conceptions con-trolling the classification of the two music repertoires (presented above) linked with different methods of string stirring and pressing, musical scales, etc, and other rules. Therefore, improvisation should abide by defined rules. Although this music is written and coded, the oral tradition of learning and teaching is still necessary in order to improve correctly.
+ Han language and some kinds of Chinese poetry are used in the lyrics. (This is former scholarly kind of the Viet's language and literature comprehensible only to aristocrats and intellectuals).
The present preserved Hue Court Music, including Nha nhac (ritual court music) constitutes only a small part of the former Hue Court Music in particular and the Vietnamese Court Music in general. Moreover, it has not been preserved in-tact. Despite of all these facts, it is a precious crystal of Vietnamese artistic intelligence and talent throughout over thousands of years. So, it is not a chance that on 7th November 2003, Nha nhac, Vietnamese Court Music, that Hue has preserved so long, was officially listed by UNESCO among Masterpieces of the Oral and Intangible Heritage of Humanity 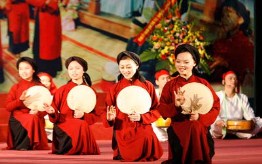 Xoan singing features itself a traditional style of folk ritual singing, attached to cult of worshipping Hung Kings and performed ... 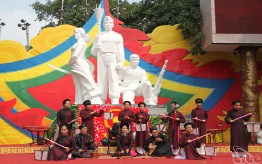 Ca Tru has many names depending on each locality, each period of time. It is also called A dao singing, ... 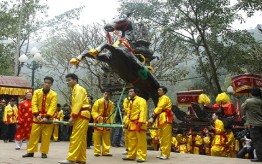 Giong Festival is celebrated annually to commemorate the mythical hero Saint Giong, who was praised for defending the country by ... 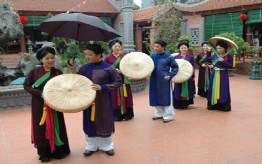 Quan Ho Bac Ninh is a category of folk songs of the Red River Delta, concentrating mainly in Kinh Bac ...

Cong Chieng (gongs) - Sacred Ar-tifacts of Many Ethnic Groups in Central Highlands On the grandiose Truong Son Range, the cong ... 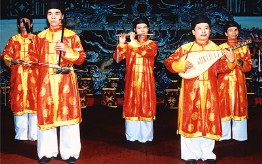 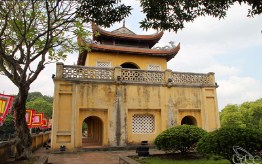 After more than a thousand years of history, the grandiose citadel of Thang Long did not exist, but some relic ... 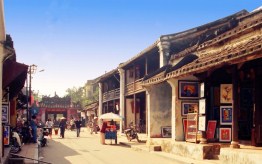 Hoi An is an old town down the Thu Bon River, on the coastal plain of Quang Nam Province, about ... 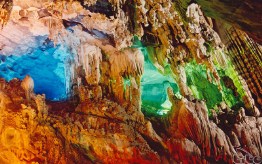 GeographySituated in the North-East region of Vietnam, and 165km from the capital of Hanoi, Halong Bay is a part of ...