Music is a major cultural element in Vietnam’s society, similar to any other nation. The Vietnamese music scene is a refined and long one, which has been able to gain influence from the west and east (depending on the geopolitical situation). The musical diversity in the country can range from American-style pop to Chinese traditional music and can be pleasure to witness on the Vietnam tours.

Music scene
The country’s diverse music scene has been able to develop mostly thanks to the 54 ethnic minorities that live throughout Vietnam. The north is more famed for the classical Vietnamese music with its roots dating back to the times of the Mongol invasions. In the central regions of Vietnam - once a safe place for the Cham Empire - the preferred sound is more related to melancholy melodies. The south doesn’t have much in the way of a distinct musical heritage, but has a more diverse one.

In Vietnam there are nearly 50 unique national instruments with the percussion family the most popular. A few of the most treasured music instruments include the dan day, dan tranh, dan nhị and dan bau. Other items that have lasted the test of time include the wind and pipe instruments.

Similar to societies in other countries, the elite in Vietnam chose to listen in the imperial courts to classical music, while the general population created and performed the folk music which has continued to maintain its cultural importance. While for the tourist on the Vietnam holiday it isn’t uncommon to hear locals playing folk songs and singing through the night.

While a lot of the music in Vietnam has a decidedly Eastern tone, the French occupation which started in the 19th century lead to the urban populations adopting a change in the cultural sounds. Even though the French culture had a significant impact on politics, food and architecture, it was later when the Americans invaded that the more western influences began to impact the music scene.

By the late 1960’s there were several local artists that started copying the popular American culture. The only real difference between the original and emulated music was the difference in language. But with the fall of Saigon at the end of the war and the union of North and South Vietnam, many of the western influences adopted over the period of occupancy were now prohibited, this included music. Most of the pop musicians who gained popularity in Vietnam had to flee the country and arrived in either Europe or the US.

Today, the music scene continues to change in full force with influences coming from the West, Japan and Korea after the reforms that took place in the mid-1990s.

Even though it may appear like the Vietnamese people at attempting to re-define the musical preferences in the country, the well established and traditional folk music is still highly favoured which is especially true with the older generation. While the old imperial music is so popular with the average Vietnamese, the old styles of music is still remembered and can feature at tourist attractions to enjoy on the Vietnam travel in most areas of the country.

Dan Nhi
The Dan Nhi (also called Dan Co) is a favourite type of string instrument and played by several ethnic groups throughout the country. This type of two-string fiddle has the look of a vertical violin and played with a bow like a small cello. Originally the strings on these instruments were made in silk, but the modern players now prefer to use metal. The actual instrument is made with several natural materials such as snake skin to cover the body and horsetail hair for the frets on the neck. The bow for playing the Dan Nhi is made of wood or bamboo and finished with horsehair.

Playing the Dan Nhi can sound much like imitating a singer with the choice to play slow or fast with long chords or short staccato notes. Plus, it gives a lot of flexibility in relation to dynamics, tone and range. Because of the variation in sound, the Dan Nhi is a very popular choice when it concerns the instruments for traditional musical orchestras.

Bamboo Flute
The bamboo flute is finely made with the stem of a piece of bamboo with small holes for the fingers. This type of instrument has a long tradition with spiritual and cultural life in the country. The bamboo has the musical spirit of the countryside and played by the Vietnamese people while taking a rest or even playing in the evening before going to sleep.

Trong Com
The Trong Com (rice drum) is named after its tuning technique which is to place hot steamed rice in the centre of the drum’s skin in an effort to achieve the desired tune. This instrument has a hollow hemisphere or cylinder with a tightly stretched membrane that covers the ends. Similar to other drums, the Trong Com is playing by striking the face of the drum with sticks. The sound produced by the Trong Com is quite dull and often used to complement the Cheo or Tuong drama. Other uses include orchestras such as Cai Luong (reformed opera), which give the opportunity to hear this instrument on the Vietnam tour packages.

Pen Pipe
The pen pipe is a type of wind musical instrument and a favoured choice with several of the country’s ethnicity groups. In the central highland the instrument is referred to as a Dinh Nam, the Mong ethnic minority make it known as Kenh, while the Kinh (Viet) group has named it Khen.

The pen pipe can have an altering number of sections ranging from 6 to 14 with the bamboo pipes organized in two rows. The sound and pitch of the instrument can change with the length of each section with the deep notes quite dull, but the sound is still strong. This type of instrument can be played at special occasions, such as funerals. 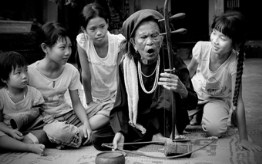 Hat Xam, or the song of the blind artists, has existed since the Tran dynasty (13th century). Tran Quoc Dinh, a ...

Cheo is a form of popular theatre in Vietnam that has its roots in ancient village festivals. It consists of folk ...

With melodious sounds, Dan Nhi becomes indispensable one in a traditional musical orchestra to express the subtle mood of man's ...

Dan Bau is a Vietnamese monochord, a traditional one-string musical instrument. The history... According to the "Dai Nam thuc luc tien bien", ... 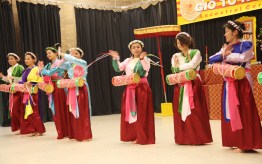 "How joyful to have a Trong Com; and it is an honour for those who can clap it skilfully, oohh ... 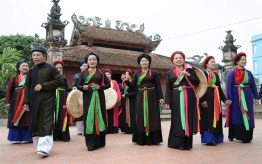 Lithophone or Dan Da is also known as a percussion instrument made of stone. The name is applied to a ... 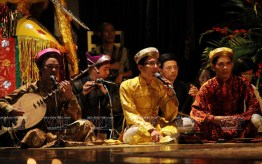 Chau van (or frequently called trau van) is a religious form of art which combines singing and dancing and used ... 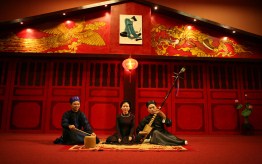 Perhaps, the most important catalyst in the development of contemporary Vietnamese folkloric performance was the appearance of the call-and-response dialogue ...

Sao Truc, which is certainly Vietnam’s most well-known wind instrument with arch-form blowing hole, has long been attached to the ...

Have you ever listened to “Nhac tien chien”? (Vietnamese pre-war music) “Outside on the veranda, the autumn rain is gently falling. The ...