Language: The Nung language belongs to the Tay-Thai language group (Tai-Kadai language family), and is in the same group with the Tay, Thai, and Choang of China.

History: The majority of the Nung immigrated to Vietnam two or three centuries ago from Quang Tay, China.

The Nung are very good at cultivating fields. However, because they live on places where wet fields can not be exploited, they have to work on terraced fields instead. Beside corn and rice, the Nung also plant some other root vegetables, calabashes, and green vegetables.

The Nung know how to make many handicraft products from weaving, metal working, poonah-paper making, and tile making. Though many of those handicrafts are family traditions, they are still secondary professions, and done during spare time when there is a break from farming. Moreover, handicraft products serve mainly family needs. Today, some of them are diminishing (weaving), and some are preserved and highly developed (metal working). In Phuc Xen village (Quang Hoa, Cao Bang), many families practice blacksmithing, and there is at least one person in each family knows how to hammer well.

Nung makets are highly developed. They go to fairs to trade, sell, and buy goods. Young people, especially the Nung Phan Slinh group, like to go to fairs and sing love duets.

Clothing: The Nung’s traditional clothes are fairly simple, and are often made from rough, handmade, self-dyed fabrics, and have almost no embroidery or decorations. Men wear shirts with standing collars, which have cloth buttons. Women wear long shirts with 5 panels, buttoned up under the right arm.

Housing: the Nung live in the northeast of the country, and mix in together with the Tay. They stay mostly in stilt houses. Some live in earthen houses built with paper or brick walls. In the past, on the border, there were houses built like a fort with blockhouses and loopholes to prevent and defend robbers.

Transportation: Traditional ways of transportation are carrying goods in the arms, on the shoulders, and using shoulder poles. In some places today, the Nung use carriages with ties or runners, which are pulled by animals as a mean of transportation.

Social organization: Before August Revolution, Nung society had developed as much as the Tay’s. Fields and terraces had become private possessions, and thus could be transferred or sold. Two social classes were formed: landlords and tenants.

Marriage: Young Nung men and women are free to date and to love. While dating, they often give gifts to each other. A young man may give his girl a shoulder pole, a basket for storing cotton (hap li), a basket for storing thread (com lot). In return, a girl may give her young man a shirt and an embroidered bag. It is the parents, however, who decide if a couple can marry each other. They need to see if the two families are of the same social rank, and if the fates of the two children match together. The bride’s family often demands gifts or meat, rice, wine, and some money. The more the gifts are, the higher the girl’s value is said to be. Marriage has to go through many steps, and the most important one is the ceremony to bring the bride to the groom’s family. After the wedding, the wife still stays with her own family until she is about to give birth, then she will move to her husband’s house.

Funerals: There are many rituals with the main goal: to bring the dead person’s spirit to the next world.

New house: Building a new house is one of the Nung’s most important tasks. Therefore, when it happens, the Nung pay close attention in choosing the land, the direction, the day to move in. they do all of these steps carefully in hopes that in the new house, they will have a prosperous life.

Beliefs: The Nung mainly worship their ancestors. The altar is put in the house, and is nicely decorated. In the center of the altar is a monument (phung slan) written in Chinese that records the origin of a family. In addition, the Nung also worship theland God, the Buddhist Goddess of Mercy, Midwife, door’s ghost (phi hang chan), etc. They hold worshiping rituals when there is natural disaster, or disease plague. In contrast to the Tay, the Nung celebrate the birthday, not the anniversary of an individual’s death.

Festivals: The Nung celebrate lunar New Year like the Vietnamese and the Tay.

Calendar: The Nung use the lunar calendar.

Education: The Nung use a script based on Chinese characters, and read in Nung and Tay-Nung language, which is based on the Latin script.

Artistic activities: Sli is love duet for young men and women to sing in groups. Often, two boys sing with two girls. They sing sli together on holidays and festival occasions, at a fair, or even on trains, cars.

Entertainment: For festivals and holidays, there are games such as throwing shuttlecock, badminton, spinning top, and tug of war, etc. 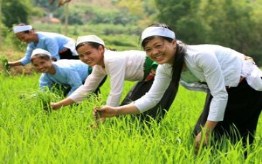 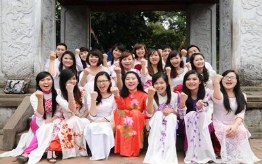 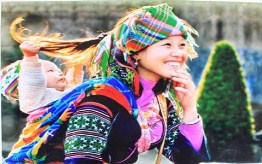 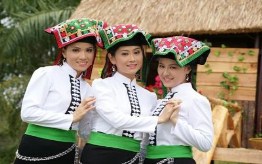 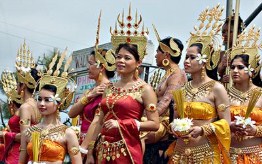 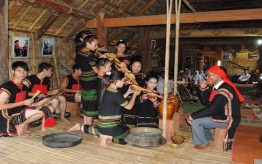 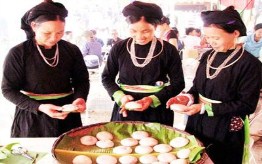 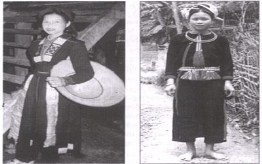 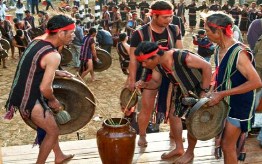 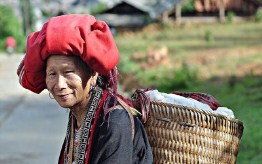 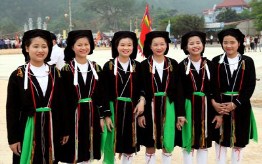 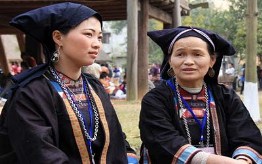 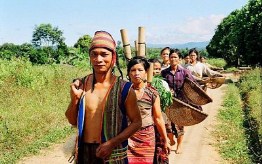