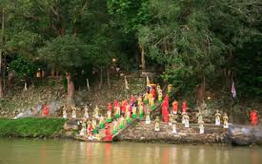 According to legend, Hon Chen (also known as Ngoc Tran Son) is the place where Thanh Mau Thien Yana appeared to rescue people. Ngoc Tran is small mountain, lasts from the foot of Truong Son range to Hai Cat village, Huong Tra commune, stop at the bank of Huong River. Ngoc Tran is considers as the deepest place of Huong Giang river.

No one can know the temple at Ngoc Tran Son appeared, they just know that people worship in this mountain, the reign of Nguyen, kings and lords continued remodeling and expanding Ngoc Tran Temple with new forms. Hon Chen festival is the biggest festival, in which Thien Mau Yana pageant is celebrated on the boat (also called “bang”). Along with the boat, single boat, double boat, they are decorated very nice. The ceremony was held with a solemn spirit. Some songs praise Thanh Mau and gods. The believers are just singing and dancing in the costumes. All things create a sacred and magical religious area.

Over the vicissitudes of history, recent years, this festival has been restored according to traditional practices with colorful local folklore. Hon Chen festival is also called Le Via Me, is not only of believers Thien Tien Thanh but also of believers Tho me. In that sense, the restoration of Hon Chen is restore a traditional cultural values of an area. 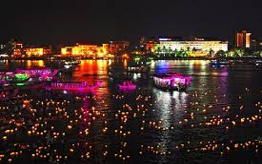 Hire a boat for a day and take a trip along the Perfume River to explore the various Tombs of ... 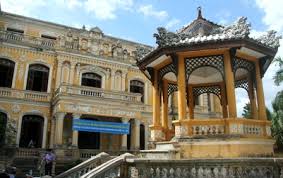 The architecturally stunning An Dinh Palace was the residence of the Nguyen dynasty and was built in early 20th century ...

Besides, you can go around Dai Noi area and Hue citadel by Cycle rickshaw. If tourists have no opportunities to Lang ... 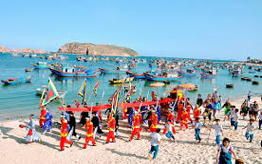 Thuan An fishing villages stretch along the Dong coast sot that pisciculture is the major profession of people. Because the ...

Before the official racing, the skiffs are carefully preserved in the ground before putting into water. Fishermen often held “tien ...

Sinh village is the last address preserved traditional wrestling of Vietnamese. The wrestling competition is held on January 10th Lunar ... 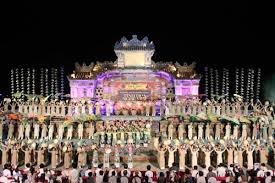 The names of the winners are written on the board and the procession continues to the Noon Gate. At the ...