Pundits say that the world is at the dawn of a New Golden Age of travel. Growing affluence and leisure of the middle class not only in Europe but also in Asia, combined to spur the travel itch, thus opening further new frontiers for travel.

Jet-set tourists, tired of the familiar venues, stereotyped bland food, tend to look for something out-of-the way, something mystique and magical, somewhere off the beaten track, quiet paradises so far seldomly frequented, offering some monetary change of perspective. The search is ahead to discover the unexpected, and enjoy in ecstasy the unfolding panorama of a new experience.

Such is our land that has so much to offer in this dawn of tourism, endless stretch of green forests, a rural community of simple people, exotic sights, and exotic food to excite the inquiring palate.

The itinerary of a visiting traveller to Myanmar will never be deemed complete if he or she has not tested the ubiquitous Mohingar or Latphet (pickled tea leaves) or sweetmeats to satisfy the sweet tooth, to name but some of the commonly known delectable delicacies Myanmar has to offer. And that is the theme of this article.

Mohingar is typically synonymous with Myanmar as is pizza to Italy, hot-dog to USA, tea to the British, sukiyaki to the Japanese, pau to the Chinese and chapati to the Indians. Verily it is an all-time favorite, from breakfast, through lunch to high teatime and even stretching to supper. You can find it everywhere, in reputable food centres, in markets, school canteens, pavement stalls. Itinerant sellers traverse through streets in small push carts, or balanced on the head in a basket by the womenfolk.

Mohingar is indeed Myanmar's fastfood because it can be relished instantly without much ado pleasing and tasty. Its food value is rich in protein carbohydrates, vitamins, minerals etc. Its recipe is also simple, easy to prepare with ingredients within reach of every budget both in ascending or descending order.

The method of cooking the broth differs with each region and taste of the locality. This fish broth is taken with rice noodles and only the such composition fittingly earns the name Mohingar. The rice noodles to go with mohingar is prepared by a special process, and carry a whiff of mild fermentation. Fresh slabs of noodles are also available, which has to be sliced to cater to individual demands.

Laying a mohingar table calls for elaborate preparation. The cooked broth is put in shining aluminum or steel receptacle and placed on open fire to keep it boiling because mohingar is served steaming hot to bring forth the correct flavour and taste. And mohingar is taken with other accompanying side dishes to make it a feast fit for a king, for in a market economy customer is king, naturally. Thus on the table are spread colourful arrays of food adornments such as fried sliced gourd with tempura (a favourite with Myanmars as french fries are to the Westerners), fried onions, fried fish cakes sliced to size, sliced hard-boiled eggs etc. Alongside with these dishes are laid a dish of dried chilli for those who like it hot, slices of fresh lemon to squeeze into the preparation for those who like the sweet-and-sour flavour, chopped green coriander leaves. All these ingredients are mixed into the piece de resistance and alors, there's none equal to this exciting delicacy of pure Myanmar origin.

Each region, each town, even each reputable shop has its own secret recipe to make it distinct and attract clients. some add coconut milk to heighten aroma and flavour, but such preparation are frowned upon by the senior clients as it adversely tend to raise blood pressure to dizzy heights. The most common species of fresh-water fish that go into Mohingar broth are carp, catfish, butterfish etc to name some.

The monhingar along the coastal regions use marine fish. Deltaic towns in the numerous lakes called 'inns' meaning large expanse of water catchment where fish breed. The broth is prepared with a liberal mix of fish fresh from the latest catch. In Upper Myanmar region to the north, customers prefer thick broth and so it is an overtone of dahl flour.

The Rakhine Mohingar is also famours for its distinct blend. It includes a very liberal mix of hot chiller pepper, which literally burns your tongue and palate if you are caught unawares. So Rakhine Mohingar is popularly known by the euphemism "Hot palate, hot tongue concoction". ( Aap- lYap )

So, this, in essence is the gourmet's delectable delight, from the sophisticated to the plebian, from the high-and-mighty to the humble man-in-the-street, Myanmar' s Mohingar, typicaly native, equal to none. 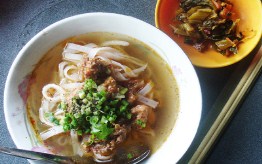 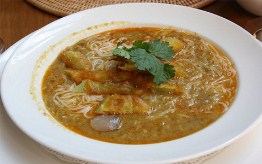 Pundits say that the world is at the dawn of a New Golden Age of travel. Growing affluence and leisure ... 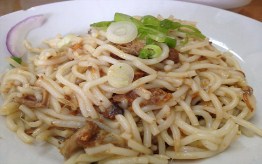 For a learner in English language nothing thrills me as the discovery of a new word or a new usage ... 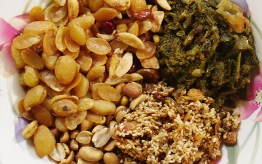 Taking tea usually without milk and sugar is the custom in the Shan State, as it is through out the ... 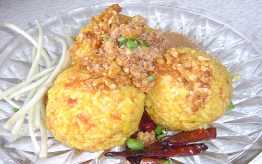 Customarily the end of monsoon in Myanmar heralds an ideal climate stretching to around six to eight months for travel. ... 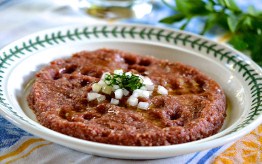 There is a set of kitchen equipment which the Myanmar housewife can not do without. It is the set of ...