Myanmar is a real mix; the majority population, the Burmar who originated in South West China many centuries ago and Buddhism are the two main influences. Visitors on a Myanmar holiday will immediately be struck by the number of temples and hence get the impression that religion is overriding. Indeed, it is very important.  The temples and pagodas are central to the life in every village except the really remote ones where spiritualism often displaces Buddhism as the inspiration of the small ethnic minorities. The ‘’Golden Land’’ reflects the glittering gold of the temples that seems to be everywhere. During the many religious festivals around the whole year there is also the colour of the traditional clothing that the people wear. It is a real treat on a Myanmar family tour package to be able to enjoy one of the many festivals.

The official language of Myanmar is Burmese, and the natural tongue of Rakhine as well. There is the written and the spoken language. English is the second language due to the country’s colonial past. Even some lessons may be taught in English.

The people are naturally friendly and sociable and this is the face that tourists on a Myanmar travel package will see wherever they go. Emotions are always kept well under control though it is important to know some basic things such as the head being the most important part of the body; you should never touch anyone’s head nor show the soles of the feet; that is regarded as rude. In private a family will always maintain traditional rituals with age being an important factor in respect.

A month after a child is born family and friends are invited around to a ceremony when the child is given a name. The baby will have been given a haircut and washed in scented water. Guests will subsequently drop silver coins into the bowl. At some point in their lives, boys will spend at least a little time living in the local temple, learning more about Buddhism. It is a way to cleanse their souls and learn the true values of life. The day of the child going to the temple becomes a family festival day when musicians play and a feast takes place. The boy’s hair is shaved and buried in a white cloth near the temple. Girls have the Natduin Ceremony when they wear gold earrings,dress and makeup.

The Wedding Day is extremely important. Preparations include reading a horoscope to select the appropriate day and a happily married couple are chosen to be master of ceremonies so that the newly-weds have the best chance of a happy marriage themselves. The hands of the bride and groom are tied with silk as they eat and guests will give them money as the best way to start their married life.

Funerals involve a similar preparation of the body and people sit with the body for two days; it is regarded as good luck to sleep in the home of the ‘’dead’’ within a week of a death.
The majority of Burmese live a rural life, dependent upon agriculture, probably around 65%.

Myanmar tour packages will usually give everyone a chance to see village life. Little has changed over time; oxen and buffalo are central to their activities. Each village will have a monastery or pagoda. The day starts early with every family member having specific tasks in the day and when they have free time they visit friends and relatives who will offer green tea and conversation.  In villages, families may be as many as 8 members, sometimes three generations. In cities, they are likely to be smaller.

Lacquerware are objects, such as boxes, bowls and buttons, which are covered in the substance lacquer. The thinner, more flexible ... 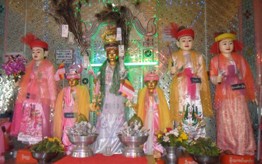 When in a local rural Myanmar village, you won't have to look far to see the signs of local legends ... 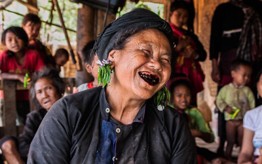 It is a local custom in Myanmar to chew betel nut like someone in the west would chew chewing gum. ... 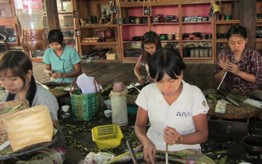 Cheerot is a local produced low cost cigar of roughly 3.5 to 6.5 inches in length which may last up ... 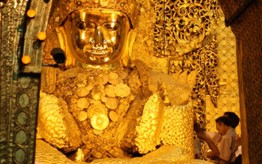 When gold is hammered into extremely thin sheets it is referred to as gold leaf. There are many gold leaf ...