The Wat Phou Complex and the surrounding Champasack Heritage Landscape is located 500 km south of Vientiane on the east bank of the Mekong River in Champasack province. Wat Phou is an excellent example of early classical Khmer architecture, dating from the 7th to 12th centuries AD. At the foot of Wat Phou is the ancient city of Shestupura, which was settled in the 5th century AD, and is believed to be the oldest urban settlement in Southeast Asia. Besides the main Wat Phou Temple Complex, there are several archeological and nature sites nearby that can take some time to explore. Considered by many to be the most beautiful of all Khmer temples, Wat Phou Champasack is distinguished as much by its dramatic and symbolic environmental setting as it is for its masterful architecture and iconographic arts.

The temple nestles at the foot of the 1,408- metre Phou Khao Mountain, known in Sanskrit as LingaparWata or ‘Linga Mountain because it is said to resemble the Linga of the Hindu god Shiva. Reputed by legend to be Shiva’s birthplace, this has been a sacred site since in least the 5th century CE, when near by Setapura is believed to have been a capital of the proto-Khmer kingdom of upper (Land) Chenla. Construction of the Wat Phou temple as begun as early as the 7th century - under Jayavarman I, though most of the surviving building date from the reigns of Jayavarman VI (1080-1107). Converted from Hinduism to Buddhism in the 14th century and still plays an important role in local religious life today. The temple complex measures 1,400 metres in line running east to west up the lower part of the Phou Khao Mountain. It is built on six different levels or terraces, connected by steps and central walkway. Most are man-made, but the uppermost level is a natural terrace where a spring flows out of the mountain. The water from this spring was channeled so that is flowed through the main sanctuary and over the central Shiva linga (the place of which is now occupied by a statue of the Buddha). From there the sacred stream flowed down the artificially terraced mountain slope in to two sacred reservoirs or barays and finally in to the Mekong River, whose life-giving waters were believed to sustain the whole of the ancient Khmer Empire. Standing structures within the temple complex include quadrangles, a Nandin Hall, small pavilions, brick towers, stairways and the main shrine, which was dedicated to Shiva. The site along with other outlining temple was inscribed on UNESCO’s world heritage List as Wat Phou and Associated Ancient Settlements within the Champasack Cultural landscape on 14 December 2001. Am Exhibition Hall funded by the Japanese government was opened at the main entrance area to the site in 2003; this houses important artifacts recovered both within and nearby the complex. A major festival is held at the site in February each year.

Traces of the Khmer road were clearly identified though examination of a series of aerial photographs covering the area from Wat Phou to Angkor. Some extensive sections of the road are still clearly visible at ground level. The road was built after the Khmer Empire was unified, when travelling through provinces was no longer too dangerous. The connection from the Wat Phou temple complex to Angkor again points to the enduring sacred significance of the temple and the LingaparWata or Linga Mountain. The road was built of compacted earth and looks like a causeway. It can be easily recognized in some sections, but other are in poorer condition. Chapels or resting place were built at regular distances along the road; an inscription at Preah Khan (a 12th century temple at Angkor) mentions 121 rest houses (dharmasala) along the route, and ruins of several of them have been found. Today there are a number of villages as well as other ancient monuments along the road, and bushes and trees have grown on it. It is often possible to make out its base, but the track is not always easy to follow without the assistance of an archaeologist. The road starts from the Nandin Hall at Wat Phou Champasack, leading some scholars to suggest that this building was originally a sacred chapel or resting house where pilgrims arriving via the road would stay for their first devotions. A walk of one hour south along the road through open country and woodland leads first to Nang Sida and further to Ban That (18 kilometres from Wat Phou). 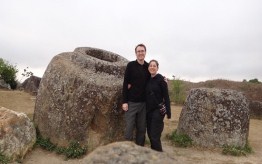 The Plain of Jars is located on the Xieng Khouang Plateau in north-central Laos, and is comprised of thousands of ... 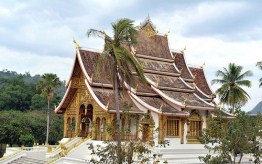 The Ancient Town of Luang Prabang in the center of northern Laos has been described as one of the most ... 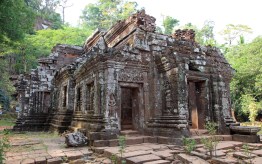 The Wat Phou Complex and the surrounding Champasack Heritage Landscape is located 500 km south of Vientiane on the east ...