A member of the Tai Kadai (or just Kadai) language group, Lao is tonal, very similar to its Thai cousin. In fact there are more Lao speakers in Thailand's northeastern border lands of Isaan than there are in Laos. The two languages are so similar that Thai television and radio have become very popular among the Lao people.

Lao language is the national language. Other languages used are French, English, Chinese, Thai and Vietnamese.

A member of the Tai Kadai (or just Kadai) language group, Lao is tonal, very similar to its Thai cousin. ...

The People's Democratic Republic of Lao is located in the centre of Indochina, sharing borders with China to the north, ... 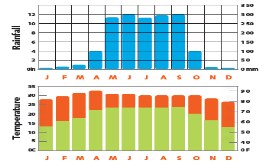 Laos enjoys a tropical climate with two distinct seasons - the rainy season from the beginning of May to the ...

The Lao people migrated into Laos from southern China from the 8th century onward. In the 14th century, the first ...

Within Laos approximately 60-70% of the population are said to be Theravada Buddhists, with the remaining population largely following Animism ...