One of the trademarks of Laos is the diversity of its people and cultures. There are a number of traditional arts and crafts that represent their way of life. Lao has a rich cultural heritage with religious art and architecture forming the cornerstone of artistic traditions.

There exists across the country a plethora of distinctive monuments and architectural styles. One of the most notable structures is the That Luang, the great Sacred Stupa, in Vientiane. Its dome-like stupa and four-cornered superstructure is the model for similar monuments across Laos. Stupas serve to commemorate the life of the Buddha and many stupas are said to house sacred Buddha relics (parts of Buddha s body).

Generally, Hinayana Buddhists cremate the dead body and then place the bones in the stupa, which are set around the grounds of temples, or wats. Different styles of architecture are evident in the numerous Buddhist Wats. Three architectural styles can be distinguished, corresponding to the geographical location of the temples and monasteries. Wats built in Vientiane are large rectangular structures constructed of brick and covered with stucco and high-peaked roofs. In Luang Prabang the roofs sweep very low and, unlike in Vientiane, almost reach the ground. These two styles are different from the wats of Xieng Khouang where the temple roofs are not tiered.

One of the trademarks of Laos is the diversity of its people and cultures. There are a number of traditional ... 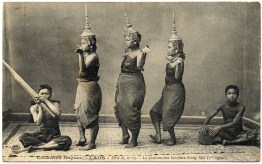 Traditional Laos music can be divided into classical and folk forms. Khene The Khene is the instrument most identified with Laotian music. ...