The Wat Phou festival is annually held in the full moon of the 3rd month of lunar calendar, on the grounds of the enchanting pre-Angkorian Wat Phou remains in Champasack. There are elephants racing, buffaloes fighting, cocks fighting and performances of Lao traditional musics and dances. The trade fair showcasing the products from the southern province of Laos, Thailand, Cambodia and Vietnam is also held. Travel to Lao, you should not miss a chance to join the interesting festival.

Wat Phou Champasack is the most famous Hindu temple complex built in Laos under the Khmer Empire, which dominated much of Southeast Asia from the 10th-14th century.

Ancient stone inscriptions found at the complex, describe how it was first built in the 5th century, its gradually began to fall into ruins, before it was finally restored to its former glory in the early 11th century. The temple was further expanded in the 12th and 13th century, with the addition of a new section designed to support the east-west axis, which runs from the foot of a dramatic hillside known as Mount Phou Nak, to the impressive Pathan Palace.

The complex is enormous and includes several large reflection pools and statues of various ruling kings. All these figures are designed to reflect the ethos of goodness and strength behind the Khmer Empire.

Shortly after the collapse of Khmer power, Buddhism became the dominant religion in most of Southeast Asia-yet remarkably. The temple remained largely unchanged. Only a few alterations were commissioned to better serve Buddhist practices, as well as the restoration of several ruined structures.

Five years ago, Wat Phou was certified as a world heritage site by the United Nations. In recent years, with the help of many international organizations and neighbouring countries, the complex has seen almost continuous renovation projects aimed at keeping what is left of the existing structure from collapsing.

Ever since Buddhism recognized Wat Phou as a site of huge religious and cultural importance, local authorities, together with several other organisations and local people, have organized Boun Wat Phou (Wat Phou Festival) on 15th day of the 3rd month of Lao lunar calendar. Designed to commemorate all those who have contributed to this wonder of ancient architecture. Based on traditional Buddhist practices, the festival is held for either three days and three nights or seven days and seven night. It hosts displays of traditional music, dance, sports and a variety of local produce. Most importantly of all, on the final day, senior dignitaries and religious figures from around the country, come to take part in a traditional Tak Bat (alms ceremony). The festival also includes a parade of elephant or horses, a crafts fair and demonstrations of ancient traditions passed down by generations of people living off the surrounding land.

Venue: Nationwide Date: First full moon in May The biggest annual event on the Buddhist calendar is Visakha Busa, the day on ...

Date: Sunrise daily The main attraction in Luang Prabang is the morning Alms Ceremony. Male Laotians from across the country come ... 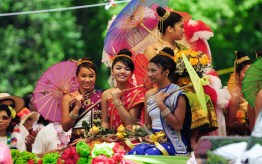 Date: 13 April Lao New Year is known as Bpee Mai or Songkan and it's the biggest and most exuberant celebration ... 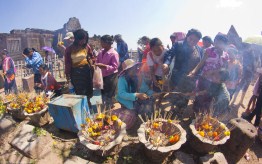 Date: 03 February 2015Venue: Champasack Province The Wat Phou festival is annually held in the full moon of the 3rd month ... 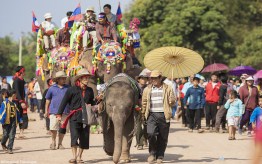 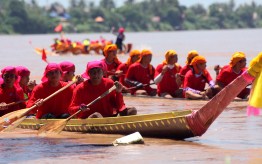 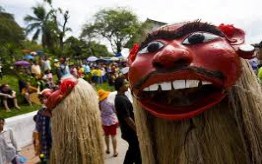 Boun Pi Mai is one of the most important annual festivals (particularly in Luang Prabang) to celebrate Lao New Year ...