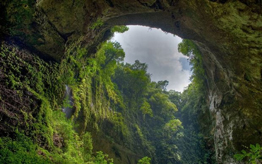 It had lain undetected beneath the Annamite Mountains in a remote part of central Vietnam for millions of years until one day in 1991 when a local farmer stumbled across it and sought shelter there from a storm.

But Ho Khanh's subsequent attempts to get back to the enormous cave he'd found were unsuccessful, so he forgot about it and went on with his job until years later when a group of British cavers asked for his help in finding it.

In 2009 they got lucky, and the Son Doong Cave was - at 5.5 miles long and 650ft wide - officially confirmed as the world's largest cave, five time the size of Malaysia's Deer Cave, which had held the title until then.
The cave, which is made up of a network of at least 150 individual caves, has its own lake, river and jungle.

Now the mythical cave has been opened up to the general public by tour company Oxalis, who are running six-day trips for visitors, but it isn't for the faint-hearted, as the journey to the cave takes a day and a half through dense uninhabited jungle, before you abseil 260ft down to its entrance.
Once rested, visitors can admire the wonders of Son Doong, including the Hand of Dog, a huge stalagmite that looks like a dog's paw.  While sink holes provide rare glimpses of light from the jungle above, and raging rivers flow in complete darkness.

The roof of the cave collapsed centuries ago, creating sections blanketed in lush green.

British tourist Simon Dunne, who was one of six to go on a trial tour earlier this year, said: 'It's very hard to comprehend the scale of the cave.
'Places that seem a 20 minute walk away take two hours to reach.  The darkness really confuses your sense of depth, especially when you're given a rare glimpse of light.'

Simon said: 'The strangest experience of them all was the silence. As they say, silence is deafening and when you're in the lake section of the cave, which is barren to all things living, standing in complete darkness and silence is an experience I'll never forget.'

He added: 'To be on the first-ever tourist expedition into the world's largest cave was one of the biggest reasons for me deciding to go.

'Most of the world has already been extensively charted and mapped, so to get the chance to experience this unique event was something I just couldn't pass up.

'The Indiana Jones theme tune would often be whistled during the trip.'

It was created 2-5 million years ago by river water eroding away the limestone underneath the mountain Where the limestone was weak, the ceiling collapsed creating huge skylights. 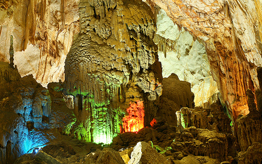 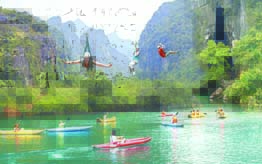 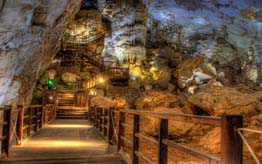 Quang Binh province is famous for one thing. Every year, heaps upon heaps of travelers come here to see the ...

Van La Underground Tunnel belongs to Luong Ninh, a village which is only 7km to the South of Dong Hoi ... 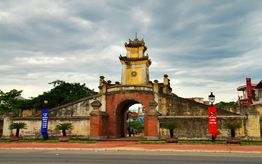 Dong Hoi Citadel is located in Dong Hoi city, Quang Binh Province. It is a complex of high fences and ... 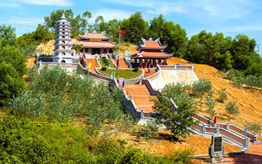 Situated on the strategic road No.15 (now the east branch of the Ho Chi Minh trail), Long Dai ferry-boat was ... 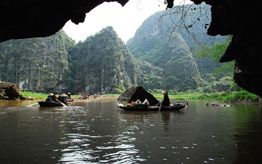 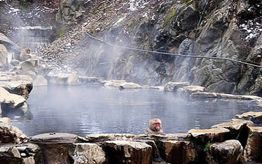 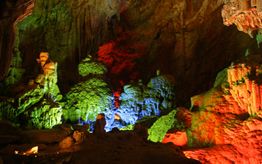 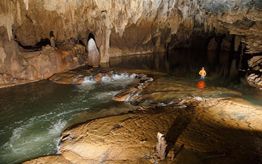 The Tu Lan Cave System is located at Tan Hoa village, Minh Hoa District, Quang Binh. It is about 70km ... 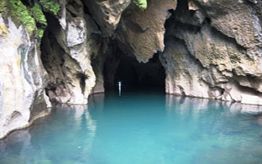 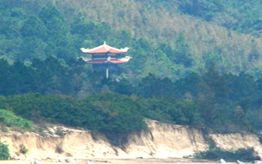 General Vo Nguyen Giap to rest in peace in the area of Vung Chua – Yen (swallow) Island in Quang ...

At Km 37 of the Ho Chi Minh Trail West, crossing the primeval forest and the winding Rao Thuong stream, ...

Bao Ninh peninsula features the sea to the east, the Nhat Le river to the west and the Nhat Le ... 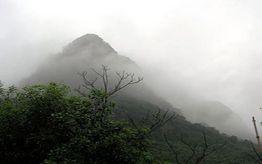 Than Dinh Mountain (also known as Non Pagoda Mountain) is about 25 km away from Dong Hoi city in the ... 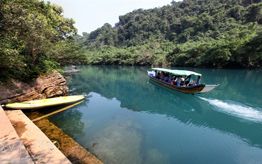 The 10km-long Chay River is an estuary of Son River with a gentle stream flow, pure water and many species ...

About 2 km to the northeast from Dong Hoi city is the beautiful Nhat Le beach with its endless white ... 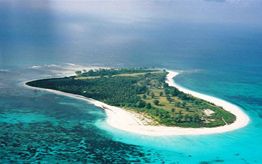 The Nuoc Mooc eco-trail is located next to the West branch of the Ho Chi Minh Trail. The word “Nuoc ...

Under the Ly Hoa Pass, where is borders between the sea and mountain have a rock ground with a lot ... 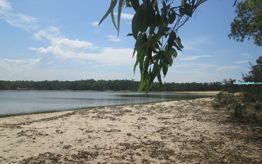 Bau Tro is a freshwater lake located between the sand dunes and Nhat Le beach. This lake is an important ...