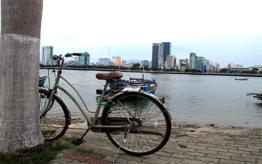 So what is the most convenient way to move to all destinations?

By foot around Da Nang city

Because Da Nang directly stretches many kilometers in all maps and is more spaced out among other cities or destinations such as Hue city, Hoi An ancient town, Nha Trang city so Getting around Da Nang city on foot is unadvisable if you do not enough healthy.

Unlike Hanoi city, the tourist destinations in Da Nang are not concentrated into a area or a district. Instead, many other destinations of big note for foreign tourists are far and have to require motorized transportation.

On the bright side, Da Nang with spacious roadways, wonderful bridges, and walkways may be a welcome change to go walk for those who want a change a stuffy air of crowded urban living. It is more interesting if you go walk at night.
By motorbike in Da Nang city

Motorbike is a popular transportation in Viet Nam so you are easy to rent a motorbike for yourself. Renting them costs about from 80,000 to 150,000VND per day for almost hotel or rental agencies in Da Nang. With a little bargaining and if you rent for some days, you could bring down the price. This transportation would be the most reasonable way to travel if you want to save costs and have high flexibility to moving among other destinations here , which can be a very big advantage in a city as large as Da Nang. You also should remember all the associated legal and physical risks of renting a motorbike such as: Vietnam license, traffic in Da Nang, traffic law,…

By taxi in Da Nang city

Taxi’s scams in Da Nang city are less common than in big cities as Ha Noi city, Ho Chi Minh City so taxi rates are quite reasonable here but you're better off using with a reputable taxi company to avoid any trouble.

Getting Around Da Nang City to Explore It's Inner Beauty

You can refer some taxi company as:

According to review of some travelers, Song Han's yellow taxis are also quite reliable.
By bus in Da Nang city

Bus service in Da Nang has been limited inside the city, but also has a fairly reliable (though not be so comfortable with a number of tourists) intercity bus to many famous destinations as: Hoi An, My Son, Ba Na hill, Hue city,…

Some bus route to the popular tourist destination:

Besides having bus of private tour company such as:

Today, transportation service is increasing developing in Da Nang city so it is easy to you choose the best moving for yourself, don’t worry it let’s coming to Da Nang city!

Railway The North-south along the city has about 30 kilometer length. Da Nang station is one of the most important stations ...