Wat Mahathat Woravihara is the royal temple of the third class. It was built in the era of King Jayavarman VII of Cambodia in 18th Buddhist century. It is situated at the center of Ratchaburi Province at the west side of Mae Klong River. Its former name was “Wat Na Phra That”. There is a 12-wa stupa made from laterite. Inside was decorated with wall paintings. There are Buddha’s relics in the temple.

It is said that this temple was built in Dhavaravati period in 15th-16th Buddhist century, the same time that Ratchaburi City was built. Later, a palace in Cambodian or Lopburi art style was built over the temple in 18th Buddhist century to be the center of the city according to the cosmic belief of Cambodia. However, the palace was broken. The stupa therefore was made instead in the early Ayutthaya period in 20th-21st Buddhist century and lasts until now.

The attraction in the temple is the main monastery. Inside, there is “Phra Mongkol Buri”, a Buddha statue in the position of subduing Mara. It is 8 cubits and 1 palm span wide. The body was made in early Ayutthaya art style but the head was made in Sukhothai art style. The body is long but the knees are short. The statue faces the east. There is a back-to-back Buddha statue facing the west, meaning to protect the city in all directions according to the belief of people in Ayutthaya period.

There is a defensive wall in front of the monastery which was made from laterite.

The stupa is 24 meters tall. The main pagoda and the small pagodas on the southern, western, and northern side are situated on the same base. There are a porch and stairs to the pagoda on the east side. The top of the pagoda was decorated with stucco. There is an arched space connecting between the pagodas. The upper part of the wall is the painting of the Buddha image in the façade glass house. The lower part of the wall is the painting of Buddha’s biography. It is assumed that the walls were painted at the same time with the construction of the pagoda and both were repaired in 22nd Buddhist century. There is also a path around the pagoda’s base. The cloister around the pagoda has the Buddha statues in Dhavaravati, Lopburi, and Ayutthaya art style. In front of the pagoda is the building of the reclining Buddha made from plaster in Ayutthaya period. It is 127 palm spans and 9 inches long. There is also the water jar museum.

It is assumed from architectural evidences that the monastery was built in the late of Ayutthaya period in 22nd Buddhist era and the last repair was done in 1966. The building was made from bricks and cement. The roof was made from wood in 2 levels and 3 strips. The tiles in the front and the back side were made into 3 verandas to support the roof structure with cement pillars. The eaves were made around the roof. The base was decorated with late Ayutthaya art style in the argosy-like shape or Aen Thong Chang. The window arches were decorated with stucco and mirrors in women pattern.

There is a Buddha statue in the position of subduing Mara on the lotus base in the monastery. The monastery was encircled by the defensive wall made from bricks and cement.

Use the same road to the National Museum, Ratchaburi. Turn left and go straight for about 200 meters. 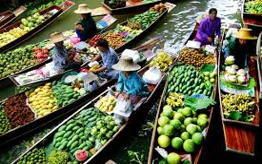 In the past, daily commerce in Thailand was conducted mostly along rivers and canals (or khlongs in Thai). Bangkok’s water ... 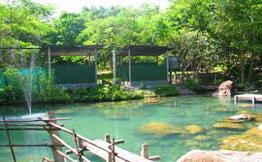 Bo Khlueng is a natural hot stream whose water source is from the Tanao Si Mountains and is full of ... 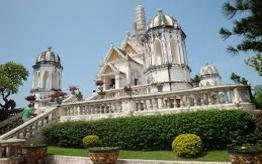 This small hill 44 meters high is located two kilometers west of the township area and is accessible by a ... 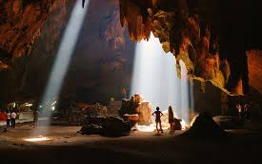 This cave arboretum is located in the vicinity of Amphoe Chom Bung, 30 kilometers west of the provincial township area. ... 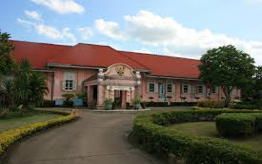 Ratchaburi National Museum is located in the municipality of Ratchahuri. The museum houses all ancient items, skeleton of ancient people ...