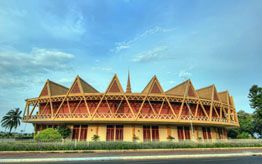 The Chaktomuk Conference Hall is located at Preah Sisowath Quay, Sangkat Chaktomuk, Khan Daun Penh. It designed by renowned architect Vann Molyvann, this venue was originally opened in 1961 as La Salle de Conference Chaktomuk. Earmarked for redevelopment as a restaurant in 1991, it was brought back into use as a theatre in 1994 following the devastating fire at the National Theatre. The Chaktomuk Conference Hall was completely refurbished in 2000, primarily to provide international-standard facilities for conferences. Subject to programming it is still utilised from time to time as a theatre venue, but only for special programmes organised directly by the Ministry of Culture and Fine Arts.

Phnom Penh Chaktomuk Conference Hall was opened in 1961 as La Salle de Conference Chaktomuk. In 1991, it was fully renovated and was meant to be a restaurant. It was brought back in its original state as a theater in 1994 after the devastating fire at the National Theater. The auditorium has a total of 592 seats with retractable writing pallets. The performing area has an irregular-shaped stage with overhead pipe grid for suspension of masking, lighting and soft hangings and a spacious backstage area.

The Chaktomuk Conference Hall in Phnom Penh has undergone several changes and was completely remodeled in the year 2000 mainly to provide international standard facilities for conferences, seminars and lectures. But because of the flexible design, Chaktomuk Conference Hall, Phnom Penh is used as a theater hall only for special programs and concerts organized by Ministry of Culture and Fine Arts in Cambodia.

The main use of the Chaktomuk Conference Hall at Phnom Penh at present is for conferences, lectures and occasional performing arts activities. The fabulous seating arrangement consist a total of 592 seats with retractable writing pallets. The hall is air-conditioned and there is a quick change area at the backstage accommodating 20 persons in all. There is also the availability of VIP Lounge in Chaktomuk Conference Hall in Phnom Penh.

The fan shaped Chaktomuk Conference Hall in Phnom Penh is one of the mainstays of Phnom Penh's public architecture. It is the architectural beauty and its relation with the tradition that attracts numerous tourists to visit the place. It has now become one of the important and major sightseeing in Phnom Penh. The Phnom Penh travel guide will definitely mention the Chaktomuk Conference Hall as it would be incomplete without it. 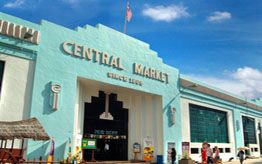 The dark-yellow Art Deco Phsa Thmei (New Market) is also referred to as the Central Market, a reference to its ... 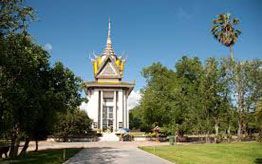 The Killing Fields of Choeung Ek, around 15kms outside Phnom Penh, are where most of the victims of Tuol Sleng ... 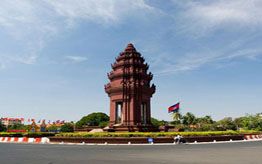 An Angkorian style tower, the inimitable place in the whole city, located in the heart of the capital. It was ... 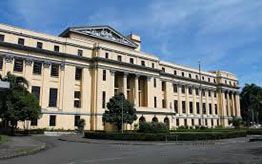 The NATIONAL MUSEUM has a good collection of Khmer sculptures dating from the pre-Angkor period (4th century) to post-Ankgor period ...

Old Market (Phsar Chas) is a local market that is not at all geared to the tourist. It carries such ... 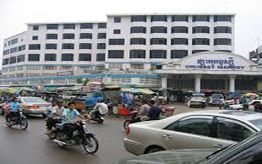 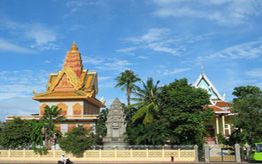 Wat Ounalom is another of Phnom Penh's five original monasteries (1422). it housed the Institute Bouddhique and library. On the ... 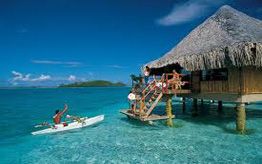 In additional to the main tourist attractions above, Phnom Penh offers a number of other cultural sites and place to ... 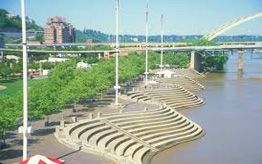 A stroll or Cyclo ride along the park-lined riverfront is a must pubs, restaurants, shops and tourist boats line the ...

Gleaming in gold, the Royal Palace is one of Phnom Penh?s most splendid architectural achievements. It is home to His ... 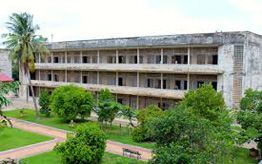 In 1975, Tuol Svay Prey High School was taken over by Pol Pot's security force and turned into a prison ...

Silver Pagoda (or the temple of the Emerald Buddha), formerly a wooden building, was rebuilt in 1962 in concrete and ...

So-named because of the prevalence of items from the Eastern Bloc in past times, the Toul Tom Poung Market today ...

Set on top of a tree-covered knoll 27m high, Wat Phnom is the only hill in town. According to legend, ...