Similan is a Yawi or Malay word, which means nine or a group of nine islands. Similan is a small group of islands comprising nine islands stretching from north to south, respectively, namely: Koh Bon, Koh Bayu, Koh Similan, Koh Payu, Koh Miang (two adjoining islands), Koh Payan, Koh Payang, and Koh Huyong. Occupying an area of 32,000 acres, it was declared as a national park on September 1, 1982 and the park office is located on Koh Miang. Similan is highly praised for its beautiful scenery, both onshore and underwater. It is situated 70 kilometers from Phang-nga town. Best time to visit is between November and April.

Interesting attractions in the National Park include:

Koh Similan or Koh Paet is the largest island of this group. It has a distinctive horseshoe-shaped bay and the average depth of the water is 60 feet. Underwater is full of rock formations and coral reefs in several shapes and forms such as deer, leaf, brain, and mushroom. The latter one is the most unspoiled coral found in the country. Its white sand beach is beautifully soft and very stunning. Diving around here is the must as it allows you to touch the real underwater world that full of fish and corals. To the north, lies a striking large rock formation with astonishing shapes such as boot and Donald Ducks head. The upper part of the beach is an ideal lookout point with a rock of a sailing boat shape.

Koh Ba-ngu is the ninth island of the Similan group. Its strange shape can be looked in different ways including a skull. Underwater scene is as beautiful as a coral reefs valley with deep gorges and various sizes of fish.

Koh Huyong, the island offers the whitest and longest beach of all the nine islands. During turtles’ egg laying season, from November to February, there would be tracks on the beach made by turtles come onshore to lay eggs, resembling centipede tracks.

Koh Miang is the second largest island among the group. It is where the office of the National Park is located. The island offers a scenic beach suitable for camping.

Snorkeling spots are scattered around these islands. The suggesting spots are sailing boat rock, Ao Kwang En, and behind Miang Island.

How to Get There

Thap Lamu Pier, located 70 kilometres north of Phang-nga at Amphoe Thai Mueang, is the nearest point to Similan. A boat trip takes around 2 hours. There is no regular boat service for travellers to the island. Boats leaving from Thap Lamu are suitable for group tours and the boat rentals range from 30,000-40,000 baht, depending on various factors.

How to get there :

Thap Lamu Pier, located 70 kilometres north of Phang-nga at Amphoe Thai Mueang, is the nearest point to Similan. A boat trip takes around 3 hours. There is no regular boat service for travellers to the island. Boats leaving from Thap Lamu are suitable for group tours and the boat rentals range from 8,000-10,000 baht, depending on various factors. It is sometimes possible for individuals to hitch a ride or pay a reasonable fraction of the rental cost on a boat chartered by a group. This method is by no means certain and should be an option only for the adventurers who have time to spare. Visitors may contact the park office at Thap Lamu (Tel: 0 7659 5045) for further information. Tour operators provide transport and tour packages to this popular destination.

A boat trip from Patong Beach, Phuket takes around four hours. Visitors can contact Seatran Travel Tel: 0 76219391-2. Diving companies in Phuket also organise a three-day trip. Prices range from 9,000 to 25,000 baht, depending on the level of luxury, and include food, and accommodations.

Mu Koh Surin National Park is an archipelago in the Andaman Sea located approximately 70 kilometers off the western shore ...

Another popular sandy beach with plenty of rocks lining next to each other, Hat Khao Lak is about 32 kilometers ...

A trip to Phang Nga Bay is part of many visitors holiday to the Phuket area. We've done several trips ...

This National Park was established in August 1991 and covers the large area of 78,125 rais in four different Amphoes ... 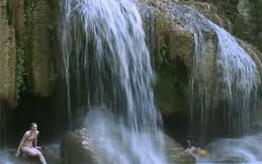 This waterfall is merged from three canals forming the crystal clear waterfall streaming down through a field of naturally beautiful ... 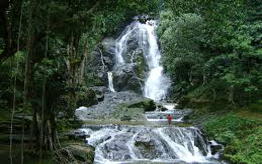 It is a popular medium-sized waterfall locates 40 kilomerters from the city center. It has 11 levels altogether. The falls ...

Located in Tambon Bo Dan, the Ban Bo Dan Hot Spring is part of The Hot Spring Beach Resort and ...