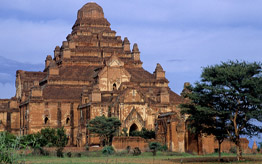 It was built by King Narathu (1167-70). who was also known as Kalagya Min. the 'king killed by Indians'. The temple is located about a kilometer to the southeast of the city walls directing Minnanthu.

After murdering his own king father. Narathu ascended the throne of Bagan and due to that. he built this temple. It is said that Narathu oversaw the construction himself and that masons were excecuted if a needle could be pushed between bricks they had laid. But he never completed the construction because he was assassinated before the completion. It was said that he was displeased by the Hindu rituals and one of them who made those rituals was the Indian princess who was the daughter of Pateikkaya. So he executed her for such reasons. The princess's father wanted revenge for his innocent daughter and sent 8 officers in the disguise of Brahmans and assassinated Narathu in this very temple.

The interior floor plan of the temple includes two ambulatories. Almost all the entire innermost passage. however. was intentionally filled with brick rubble centuries ago. Three out of the four Buddha sanctums were also filled with bricks. The remaining western shrine features two original side-by-side images of Gautama and Maitreya. the historical and future Buddhas. The interlocking. mortarless brickwork at Dhammayangyi. best appreciated on the upper terraces. is said to rank as the finest in Bagan. Unfortunately the highest terraces and hidden stairways leading to them are now off limits to visitors.

Gadawtpalin Temple is located about 3 miles south of the Bu Pagoda on the bank of the Ayeyarwaddy River. It ...

Pahtothamya Temple is popularly held to be one of five temples built by the non-historical King Taungthugyi (931-964) referred to ... 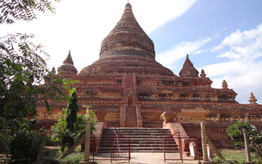 Mingalar Zedi Pagoda or the "Blessing Stupa" lies close to the Ayeyarwaddy River Bank. The Pagoda was built in 1277 ...

Tharabar Gate is the main gateway to the ancient Bagan city. It is the eastern gate of the old wall. ... 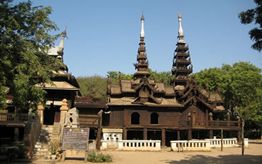 Myoe Daung Kyaung or Myo Daung Monastery means the Monastery at the corner of the city. It was the main ... 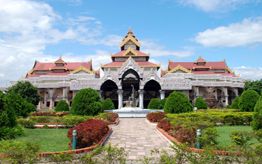 The Bagan Archaeological Museum was opened on 17th April 1998 in the world renowned ancient city Bagan. in Mandalay Division. ... 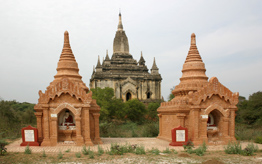 Shwegugyi Pagoda was built by King Alaung Sithu during A.D 1141. This pagoda is located near the entrance of the ...